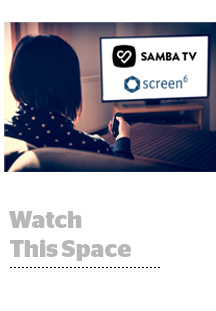 Advertiser interest in over-the-top is picking up steam and dollars – but cross-platform measurement is lagging behind.

Ashwin Navin, Samba’s CEO and co-founder, declined to share the deal price, but noted that the company used a portion of its May $30 million Series B round to finance the acquisition.

Screen6 will operate as a wholly owned subsidiary of Samba TV and maintain its status as a data processor.

The idea behind combining Screen6’s identity resolution technology with Samba’s real-time viewership analytics is to help marketers do three things they can’t easily do today: dedupe audiences across screens, expand their reach across platforms and get a handle on one of OTT’s biggest bugbears – frequency capping.

Part of the issue with frequency capping in OTT environments is that advertisers can’t get cross-platform insights quickly enough to optimize their campaigns mid-flight. That’s part of the reason why OTT viewers are subjected to the same ad over and over and over again within a single sitting.

“When people sit down to watch TV they might see the same ad 10 times, 15 times, even 20 times, and it’s something our clients tell us they’re really concerned about,” Navin said. “The notion of a household doesn’t really exist within a lot of ad tech platforms.”

But with better data, more data and the ability to deduplicate audiences across screens, marketers can get their message across without wasting money and annoying viewers to within an inch of their sanity with repetitive messaging.

Getting OTT measurement right is a lucrative proposition. Global linear TV ad spend alone was $140 billion in 2018, according to a forecast from UK-based media research firm WARC, and those budgets are starting to flow over to OTT.

“These are substantial budgets, which is why we’re seeing so much growth for companies like Roku and The Trade Desk,” Navin said. “But it’s still very early from a targeting and measurement standpoint.”

Samba claims that its “smart TV backbone” gives it an edge in the battle for TV bucks. Samba’s technology, which includes an automatic content recommendation solution, analytics and an audience platform, is directly integrated into multiple smart TVs, including models from Sony, Sharp and Philips. The company also has its own identity graph for use across its TV footprint.

But with direct relationships with smart TV manufacturers – and thereby consumers – comes great scrutiny. In July, Samba got The New York Times treatment in an investigative profile on data tracking in the smart TV space.

Although Navin said Samba has “always been 100% opt in” – viewers see a series of opt-in screens when they set up their TVs – the company recently made a bunch of changes to shore up its privacy controls in light of the Generation Data Protection Regulation and California’s upcoming privacy legislation. It’s now possible, for example, to suppress all targeted advertising without “getting a diminished level of service,” Navin said.

Samba was attracted to Screen6 in part because of the company’s approach to privacy and its European roots.

“American companies with graphs are leaving the market, but Screen6 is thriving,” said Navin, who noted that Samba plans to continue expanding internationally in the months ahead. This year was all about scaling its presence in Europe, and Asia Pacific and South America are on the agenda for 2019.

All of Screen6’s 15 employees, including CEO and founder, David De Jong, will join Samba, whose headcount topped 300 this year. De Jong will now serve as Samba’s managing director of business development.

Samba is planning to show off its new reach and frequency solution using the Screen6 tech at CES in Las Vegas in January.