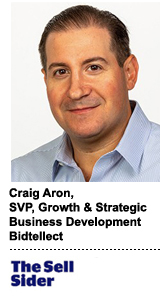 Today’s column is written by Craig Aron, SVP of growth and strategic business development at Bidtellect.

Put another way, there have been way too many hands in the proverbial cookie jar. The ISBA Programmatic Supply Chain Transparency Study conducted by PwC earlier this year found that, in one case, 15 advertisers had nearly 300 distinct supply chains to reach 12 publishers. This complexity contributes to a markedly opaque supply chain.

One powerful tool the industry has to fight this opacity is yet another ad tech initialism: SPO or supply-path optimization.

SPO means different things to different people but, at its core, it’s about making the programmatic supply chain more efficient so that more working media dollars make it from an advertiser to the publisher. The challenge is that there is a lot of noise and hyperbole around achieving true SPO.

But real SPO can be achieved from both a financial and a technical standpoint. Financially, real SPO means eliminating unnecessary middlemen that don’t provide any value to the programmatic transaction. Technically, however, that requires configuring the mechanics of the programmatic auction in order to achieve the shortest distance between a request for an ad on a publisher’s site and an advertiser’s bid, as well as the subsequent serving of the ad once the auction has been won.

The good news is that training a spotlight on the supply chain has moved SPO to the top of the agenda for both the buy side and the sell side. Tools and technology, including initiatives such as Ads.txt and Sellers.json, continue to be developed, and will help increase efficiencies and eliminate waste. These initiatives have been talked about ad nauseam recently (in a good way).

There is also a (small) number of companies that are – and have been – committed to building a cleaner ecosystem. They did not have to build on top of the legacy programmatic architecture which was constructed on a foundation that prized having as many bidders as possible bid into as many exchanges as possible … and then be optimized by as many SSPs as possible.

In the past, this was necessary to drive up bid density and publisher yield in a second-price auction waterfall world. Now that the ecosystem has largely changed to first price with unified auctions, legacy ad tech needs to – but still hasn’t – fully caught up.

Although there is still some work to be done, it’s encouraging to see the innovation and developments that are already underway and that will hopefully continue to evolve – and make even Archimedes proud.