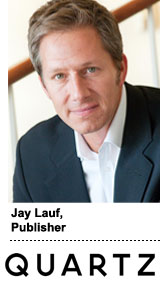 Nearly five years ago, Quartz publisher Jay Lauf set out to create “the business news brand of our century.”

Lauf sees Quartz well on its way to reaching that goal. At launch, the company aimed to provide readers with a mobile, social-focused alternative to current high-quality business news sites. Most, like The Economist, required a subscription.

“The premise [was] that we could create really high-quality news analysis about the global economy, but serve it to readers in a way that was more endemic to their habits,” said Lauf, Quartz’s publisher since its inception.

Originally designed with experiences for both mobile phones and the tablet, Quartz now focuses on mobile screens of all sizes. And it’s expanding into new ways of interacting with consumers on their phones.

Last year, the chat-based Quartz app became a breakout hit. It has been downloaded 650,000 times since launch, was named a top app by GQ and Apple and landed Quartz a Knight Foundation grant to come up with more bot-based journalism ideas.

Quartz’s ultimate mission is to fund quality journalism. It made a profit last year of $1 million on $30 million in revenue, according to Crain’s. The site doesn’t accept any IAB standard ad units, instead focusing on high-impact display and custom content, often running in concert with one another.

Lauf spoke to AdExchanger about Quartz’s past, present and future.

AdExchanger: On the advertising side, what was your strategy at launch and how did it evolve over time?

JAY LAUF: Quartz was born in 2012, when we had the benefit of knowing that the IAB banner ad system was broken. There was a glut of inventory in the marketplace and underperforming inventory. Advertisers weren’t valuing it, and my thought was why would we recreate it?

The phrase we used at the time was to make digital advertising as endemic to the experience as it is in the September issue of Vogue magazine. The idea was to create nonintrusive advertising that could stand up on the quality and usefulness of the content.

How does Quartz think of itself: as a niche publisher or someone that offers a scaled business audience?

The scale game is over. Even Business Insider, which unapologetically tries to reach everyone, is niche relative to Facebook. All those platforms have won.

My approach to this is to pick a niche. “Global business professionals” is a niche offering, but one that has enough scale to be an interesting business. Let’s say we fast-forward X number of years and we’re reaching 60 million uniques globally. You can build a pretty significant business off that.

But if you chase scale, purely for scale’s sake, you can risk losing that demographic.

The latest revenue figures had Quartz earning $1 million in profit on $30 million in business. And it’s never received outside funding. What’s your philosophy on growth?

Steve Jobs said something to the effect that innovation is saying no to a thousand things. One of the advantages of being a privately held company, without a blank check to write, is that it forces the smart discipline of what not to do. There are tons of things we’ve chosen not to do that would have been a distraction, perhaps lessened our performance or taken us off-mission. It enforces a discipline that can be really healthy for a business and deliver the results you cited.

What have you said no to?

We’ve had innumerable overtures or requests for launching or syndicating local language editions in Russia, Scandinavia and South America, and we’ve said no because we felt it would take away from the voice of the brand and our ability to control the brand.

We could have built a really expensive video studio with hundreds of people doing video. And if you look around the landscape, there are a lot of people losing a lot of money on that proposition. Our approach has been much more disciplined.

In the beginning it was hiring three or four polymathic journalists who had video chops in filming or editing or scripting. We unleashed them on Facebook without any commercial constraints to find out what video resonates with audience.

Today, we are up to a billion views of video content on Facebook, and it’s helping us hone what subject matter we focus on. Maybe you have the seedlings for a Quartz TV down the road happening now. But it’s in a much more disciplined way than publications pouring money into high-production value content that’s not producing any money.

Quartz doesn’t do programmatic advertising. How do you see its rise affecting digital publishing?

We don’t do programmatic mainly because we have zero standard ad units to even put in the programmatic system, which should not be read as we are anti-programmatic. There are going to be great advantages over time.

My disposition on programmatic is this: The idea of automating the delivery mechanism and systems and enhancing targetability to the extent that it doesn’t intrude on people’s privacy is an inexorable thing and a good thing for the industry overall.

But don’t think the technology is there yet to safeguard against all the downsides that we’ve just discussed. Until that’s the case, it’s really incumbent on marketers to demand from their ad tech, publishers and agencies safeguards and best practices.

The Quartz app has a great novelty value. But how is the app doing today versus at launch, in terms of retention?

It is surprisingly sticky. The average user goes into the app twice a day and spends a total of five minutes there. We view button taps as the best measure of engagement with the app, given the way it works.

The average user taps 13 times per session. And between 30% and 40% of users get to the end of the script on any given day, meaning they read all of the content in the app.

Anecdotal evidence is anytime I am out traveling around and talking to people who know Quartz, a lot of them will say, “I love it, I launch it every afternoon,” much like our daily newsletter. We’ve developed a cadre of superfans for our products.

What social network is your underprized gem?

The gem is the LinkedIn journey. For the first nine months, LinkedIn was by far the No. 1 driver of traffic.

Then they changed their approach and algorithm to keep everyone on the site and it drifted down to basically zero and stayed there for years. It has since started to grow again. They have started to become a content destination. We’ve seen LinkedIn go up, down to nothing and back up again.

Quartz has said it retains 95% of its advertisers. Is that common?

No, I’ve never worked at a place with that kind of retention rate. Thus far, we have been nailing this intersection of inventiveness around mobile and social with quality. Advertisers on the surface are hungry for that. But it turns out that experience delivers a better result, and at the end of the day that’s the thing that keeps them coming back.