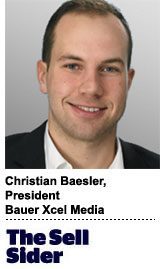 This time last year, there were reports that “original sharing” on Facebook was in decline.

A year later, and Facebook has released Stories – a video-sharing feature it borrowed from Snapchat – across all of its properties. As users start sharing more content this way, Facebook could upgrade or even replace its news feed with full-screen photo and videos, which will push publishers to focus on richer video-focused content, much like Snapchat Discover.

This change in social formats is no small thing for publishers, which may soon find themselves shifting their entire editorial strategy to embrace a more visual form of social content creation. Millennials and younger generations overwhelmingly prefer social channels to discover content. After decades of email and texts, tweets and updates, millennials are making the move to video-focused features like Stories and Facebook Live.

But the opportunities don’t end there – an ecosystem of capabilities is developing on top of the camera phone. Much like Google Maps, the camera itself is ripe for innovation.

It’s Official: Social Is The Center Of The Content Universe

More than half of millennials cite Facebook as their primary source for almost every type of entertainment content, including news, pop culture, fashion, sports, travel and nearly anything else that traditional publishers create. Younger generations are similar.

Rather than cropping still photos and shortening headlines, creative teams will need to create video features. Vogue live streaming at Fashion Week and ESPN’s College Gameday features are good examples. These features require more production, more relevance to trending topics and more visual interest than what many editorial teams are equipped to create today for Facebook.

During the roadshow leading up to its recent IPO, Snap emphasized that it is a camera company, not an app. It is betting on a future where communication is dominated by the camera phone. User-generated videos of police brutality, overnight YouTube superstars, even FaceTiming friends are regular parts of our daily communication. However, Snap believes that this is just the beginning.

Big players could easily join Snap and Facebook and push media companies to embrace video storytelling even more. Imagine zooming in on a Google Maps satellite image to find a beacon indicating that live-streaming videos are coming from certain places. With the click of a button, you could start watching videos from millions of connected phones all over the world.

A travel publisher might create skins, faces or even fact blurbs that people could download to enhance their own videos. Or they might engage a brigade of backpackers to upload stories on their behalf.

Apple also recently announced Clips, a free app for iPhone that might be the jumping-off point for Apple to offer augmented reality through the camera. Its app allows people to create crazy special effects like comic-book styling on top of images. Like Uber or MapMyRun, which grew on top of Google Maps, competition could arise from many unusual places.

Publishers need to be entrepreneurial in their approach to video and make it central to their content distribution plans. Those companies that embrace new features and function quickly will be the most relevant to younger generations who have deemed this new way to get content as the best.