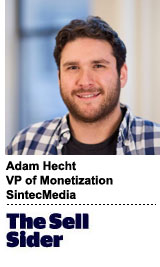 Today’s column is written by Adam Hecht, vice president of monetization at SintecMedia.

Facebook’s recent announcement that it will bring demand from its Audience Network to header bidding through partners like Amazon and Sonobi has been touted as good news for publishers.

However, publishers need to remember that the major reason Facebook is doing this is not to become closer with publishers – it is to steal market share from Google. Now is the time for publishers to work their negotiation skills.

Recently, eMarketer published a forecast for 2017 that shows Facebook’s share growing by 32% and Google’s jumping by 15%. Facebook is starting to catch up to Google, and its move into header bidding is part of that strategy.

Facebook’s relatively low-key inclusion of Amazon in its list of partners should not be overlooked. Together, these two companies not only achieve massive scale, they could offer buyers a combination of targeting features that rivals the value of Google’s search data soon.

Between Amazon’s retail information and Facebook’s social graph, precise or even closed-loop targeting at scale could be a major selling point. Publishers that take advantage of Facebook header bidding could become much less important if buyers were simply looking to locate Amazon consumers on their website. Publishers can’t blindly walk into this situation.

Just after Facebook’s announcement, Google decided to open up its beta for its EBDA programmatic product to more partners. While header bidding provides a popular alternative to Google’s own huge ad exchange, publishers still rely heavily on Google and are likely to accept some form of EBDA because of how convenient it is, being connected to the DFA ad server. However, publishers need to use the open beta invitation to give honest feedback to Google regarding fees, data sharing and integrations.

With publishers in danger of becoming even less differentiated as the move toward audience buying continues, they need to keep their eye on their own long-term success as the platforms are jockeying with each other for market share.

First, publishers could request a standard published margin or media share that is exposed to the entire market, perhaps using a system like blockchain. Second, publishers should be able to access enough data to understand what types of audiences are being purchased on their site and by which advertisers. Third, publishers should pressure platforms to forgo any double charges or premiums to any other third parties that enter the deal, which create lower margins for publishers.

Facebook says it will work with any partners that are open and transparent. For publishers, reporting and audience data from Facebook should also be transparent. It’s time for publishers to demand true data transparency, not just open bidding rules and outcomes.

There is also positive momentum from recent advertiser moves to avoid bad-quality content online. Both Facebook and Google have seen some public scrutiny regarding ad placements, metrics and content quality. While advertisers aren’t likely to leave the giants any time soon, this presents another opportunity for publishers to negotiate.

Simply opening the discussion isn’t enough to move the needle. Publishers have been guilty of talking out of both sides of their mouths in these situations in the past, from relying heavily on platforms even as they complain about them, to even having bad-quality content of their own.

To truly take advantage of this rare window of bargaining power, publishers need to be transparent themselves and work together to determine the few best chips to bargain with. Ideally, both publishers and platforms can come out on top.