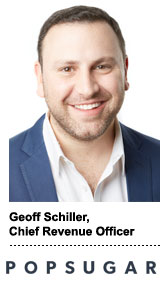 What started out a decade ago as a celebrity news site has used its foothold to expand into a dozen verticals, including food, fitness and moms.

And PopSugar increasingly tells its stories via video. PopSugar Fitness is the standout, with more than 1 million followers doing flat belly cardio sculpting and chasing their workouts with raw protein-packed vegan Snickers bars from its healthy eating Glow channel.

But PopSugar isn’t the web’s only VC-funded, female-focused publisher. It faces competition from digital peers such as Refinery29 and Bustle, as well as brands like Cosmopolitan, the 100-year-old magazine that parlayed its name into a top Snapchat Discover channel.

“We make the aspirational attainable and inspiration relatable,” he quipped.

Schiller joined PopSugar a year ago to pursue larger relationships with agencies and brands. The relationships go beyond display and video ad buys to include content creation, store openings and experiential events like Coachella.

For beauty store Ulta, PopSugar provides consulting services so it can connect with millennial consumers. And many PopSugar video ads use brand integration, not pre-roll, to get their message across.

Schiller spoke to AdExchanger about how PopSugar views today’s media environment and keeps up with the changing media landscape.

AdExchanger: How is PopSugar thinking about diversifying revenue?

GEOFF SCHILLER: We’ve been investing significantly in our video business. We have our core display business, and we’ve not de-emphasizing that, but at the same time we are focused on growing our video footprint.

We drive an average of 300 million video views a month [according to internal analytics], and we will continue to grow in that space. Most if not all of the big deals we cultivate with our brand partners include a video component. It’s not just video views, it’s how we can innovate through a whole variety of lenses: in formats, white-labeling and content licensing.

How are brands buying ads against your video content?

We have done a great job of cultivating hits, and we average in the millions [of views] per episode for hits like ClassFit, Eat The Trend and Glow. For our beauty franchise, Beauty Junkies, 70% of those episodes were sponsored last year. That’s a good, healthy sign that the buying mentality from TV is shifting into social video.

Snapchat is working with brands via content licensing agreements. Does that diversify revenue for publishers, or do publishers lose control of their ability to make sales?

I don’t think it’s one or the other. We’ve licensed content and white-labeled content to TV networks, so we have diversified. In the case of Snap, publishers are debating the merits of both. But Snap is now shifting their sights toward original programming, which is taking it down a notch. Instead of potentially saying to a brand, “We want to own your entire brand,” it’s them wanting to own a show.

NBCUniversal invested $10 million via a Series B round in 2007. Are they still involved in your business?

NBC was an early investor and, as part of that, sold PopSugar ads. That was the extent of third-party monetization. In 2009, we took that back and began building out our own ad sales team. We bought out their investment.

The demand for PopSugar as a standalone versus as part of something larger outweighed the demand for NBC to continue on. [Co-founders] Brian and Lisa [Sugar] made that decision, and it was the right one.

Many digital publishers with TV companies as investors are using those connections to get cable channels on skinny bundles. What are you doing to get on these other screens?

We view PopSugar as the focal point, and everything around that is a touch point consumers can engage with us on, whether it’s social or OTT. We are on Apple TV, we are on Pluto, and we continue to explore a variety of OTT platforms.

PopSugar sold ShopStyle to eBates in February, divorcing content from commerce. What’s the future for you in terms of affiliate marketing?

We will continue to invest in commerce content with our partnership with eBates. We’ll be leveraging our editorial and video teams to create commerce-driven content, so we’ll explore all formats and functions through that lens and mandate.

How is programmatic affecting your business?

We fully support the idea of automation when it comes to removing friction from the buying process. We sell out every month, so unless it’s in programmatic guaranteed, nothing goes beyond direct-sold.

Some of our competitors might have unsaleable inventory, but for us everything is monetized. And while we have private marketplace capabilities, typically we are sold out and it’s not a robust way to transact with us.

PopSugar is a VC-funded publisher. Is it focused on growth or profitability?

We are focused on profitable growth. We benefit from having a really sharp CEO/CFO/COO team that has created a culture of not spending like a drunken sailor. We haven’t raised in a really long time, and we’ve become a profitable business, which is a unicorn.

What are the effects of P&G marketing chief Marc Pritchard’s comments on measurement and transparency?

We’ve always subscribed to being transparent with a clean supply chain. We don’t work with networks and we aren’t on the open exchange. We are owned and operated. Ad networks can’t control their traffic sources and it becomes harder for them to maintain that clean supply chain.

What trend or practice out there among publishers is hurting the industry right now?

No. 1 is the lack of transparency around audience scale. Scale for the sake of scale is not good, and comScore can absolutely be gamed.

The comScore traffic assignment letter has become a big tactic to help brands inflate their scale. And just because you growth-hacked the hell out of your site and grew your uniques significantly doesn’t mean you’re a real brand. In TV, you deliver X number of GRPs and everyone accepts it. The notion that everyone is No. 1 in something is a problem.

How much traction do you see in automated guaranteed?

It’s still nascent. We are seeing more and more agency teams want to engage in those conversations, but I think there is still a lot of wood to chop relative to automation in general.

Jon Steinberg at Cheddar had an interesting take, in that automation should be relegated to the two biggest scale players, Facebook and Google. Then you can do all the frequency capping and tracking in a way that’s reflective of their massive reach, and for publishers, it’s the storytelling. Publishing is the top of the funnel, and Facebook and Google are the bottom of the funnel.