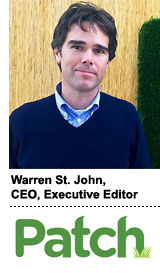 The rise of digital advertising has been tough on local news.

Not only have legacy operations, like local newspapers, struggled to survive in the era of Craigslist, Google and Facebook, digital ones haven’t found it easy to gain a perch. Most recently, the owner of Gothamist and DNAinfo shut down the sites in early November after its journalists unionized, with the owner citing unprofitability.

Patch, in contrast, is in the midst of executing a turnaround and has been profitable for the past 15 months. It now serves 1,200 communities with a staff of 148.

For the past three years, the company has been owned by private equity firm Hale Global, which bought Patch from AOL in early 2014 after the company laid off a third of its staff.

Has Patch finally figured out the local model?

“We think we are a long way from having totally cracked the code on local,” said CEO and executive editor Warren St. John. “It’s a super challenging environment. We are encouraged with our progress, but not remotely satisfied.”

Shortly after the acquisition, Patch’s user traffic cratered. Instead of building the site, it had to invest time and resources in migrating all data from AOL’s tech.

But by the second year, Patch had started to take advantage of techniques that worked, such as local news notifications and alerts. Alerts now account for 20% of Patch’s total traffic. In year three, Patch added social media listening and distribution, expanded its newsroom and decided to enter new markets.

“We do [expansions] very differently than the old way, which was to make a very big bet,” St. John said. “Patch would go to Boson with 80 local editors and 80 local Patches. Now, we start small and try to grow into something that works.”

That may mean it enters a new metro area with seven Patches, or a smaller city, like St. John’s hometown of Birmingham, Ala., with just two.

St. John talked to AdExchanger about how Patch is trying to make the local news model work.

AdExchanger: What’s it been like to expand to new territories with Patch?

WARREN ST. JOHN: Miami and Houston were brand-new Patches. Our users rewarded us for our coverage around the hurricanes. We had traffic, but we also had 20,000 new email subscribers in Florida alone around Hurricane Irma.

With our coverage around bad weather, we are writing directly for people in that area being affected by whatever the news is. We focus on where the shelters are, if there is a boil-water decree issued by the health department, what roads are closed, when schools will be open – the type of granular, hyperlocal content that has been harder to maintain as local news is affected by the economics of digital.

What is the revenue opportunity for local digital content?

We have business development partners, like Realtor.com, who do robust tech integrations with Patch. And we do commerce affiliate deals. For Amazon’s Prime Day, we drove close to $1 million in sales to Amazon through our content.

Is there classifieds-type revenue as well?

Craigslist disrupted local media and is now a cash-generating behemoth. We are trying to take some of Craigslist’s secret sauce and use it in a digital environment that is clean, with high visibility and high traffic. It’s self-serve for local users who may not have the budget for our inside sales team.

We built the plumbing for featured events and launched this year. You can now promote an event on a per-Patch basis. One town is $20, and other nearby towns cost more.

We do that for local job listings as well, and we have a native announcement that people use for yard sales, lost pets and wishing grandparents a happy anniversary. It’s very Norman Rockwell-ish.

How do you make programmatic work for your business?

We have 98% US traffic and no bot traffic. We have a fairly advanced ad stack: Index Exchange manages our header bidder, and we have a server-to-server integration with Amazon.

We are working hard on things like page-load time, viewability and sending signals to programmatic trading desks that if you buy on Patch you will be in front of an attractive audience of high-spending consumers. Our users do trend above the internet at large [for income and age] because we have a lot of suburban users, and I think our results on Amazon’s Prime Day speak to that.

Patch is a publisher competing against platforms, including NextDoor, but also Yelp or Zillow. How do you look at that challenge?

Everything we have been doing from a technology standpoint for the past year and our whole road map is about making Patch, which was previously just a publisher, realize its potential as a platform.

Everything we are rolling out over the next two quarters will make it easier for partners and users to publish. Our self-serve products are platform-ish. I’m proud of the quality of our content, but we want to make sure we have an environment where local users can participate as value. A great deal of high-value information can come from citizens, not journalists. Look at Twitter.

How have you been able to turn a profit?

No. 1 is running the business responsibly. We went from high cost to relatively low cost on day one. And we have also been testing things and doubling down on things that have succeeded, rather than making big, reckless bets. We are a bootstrapped company funding its own growth. That’s forced us to be disciplined and creative and hack our way into improvements.

Does Patch benefit from economies of scale?

There was this big debate early on about whether local can scale. The technology costs suggest that local must scale.

We have one Chartbeat account, one Google Analytics account and one content management system for the whole network. If we were 1,200 hyperlocal publishers, we would have 1,200 tech stacks and analytics contracts. And they don’t have enough impressions to get those platforms to call them back.

I talk regularly to privately owned hyperlocal publishers, and we have been approached about acquisitions. I hear from them over and over that technology costs are 60% of total costs.

How is Patch trying to grow its user base, including highly loyal users?

On the traffic development side we have built our platform to integrate with other platforms. We have feeds and APIs galore. That’s how we integrated with Apple News, Facebook Instant Articles, Google AMP, the Bing app, Alexa. Microsoft’s Cortana is underway. We have 1,000 articles a day across the network, and we can push that out across the platform and drive people back to Patch.

Then, our challenge is to present them with a value prop that’s sufficient enough to get an email address or app download.

How valuable is the Patch app user?

Email is bigger than the app, but we have never put the banner across the app saying “download” or anything like that. With the app, in terms of visits per month and time spent per month, we are seeing significantly higher engagement.

We discovered with our current app that when we let people follow more than one community, two-thirds of people do that. And some people follow a lot more – people might want to follow all 80 Long Island Patches.

This created a good problem: How can we make sure it allows people to navigate the app effortlessly without getting bogged down? The new beta app we have been building is so much faster.