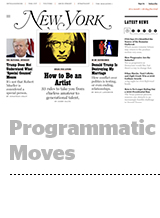 The publication has long serviced programmatic deals yet didn’t tout them in market. But as programmatic becomes the dominant way to transact, New York Media hired Jeremy Fass in July to head its programmatic revenue operation. His mandate? Be proactive about programmatic, not reactive.

“Due to the shift in the marketplace and digital traffic growth, it made sense to focus on programmatic,” said Fass, who has logged time at Condé Nast, Facebook and PubMatic.

He’s using a programmatic playbook to get New York Media’s existing deals to run more smoothly, identifying how to supercharge advertisers’ campaigns with its data and adding new partners.

The changes at New York Media go beyond its programmatic business. A dynamic paywall is starting to gate content. The publisher, once focused on covering the New York market, now engages a bigger and broader audience as its titles, including The Cut, Vulture and other blogs, attract readers interested in fashion and culture. And the family operation may be up for sale.