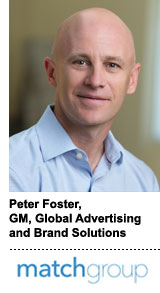 Match Media Group runs an ad business for a dating subscription company. Because ad business revenue accounts for only a small piece of the pie, the ad team always considers the effects of its ads on the user experience.

“A fairly good parallel is Amazon,” said Peter Foster, GM of global advertising and brand solutions. “They run an ad business that drives as much revenue as they can, but doesn’t run afoul of the ecommerce business that’s the core of the company.”

“We don’t serve an ad every time we feel like we could serve an ad today. We are being slow and steady on purpose,” Foster added.

Match Media Group sells ads both direct and programmatically and has embraced header bidding on desktop and mobile web. Mobile app ads have been trickier; technically and creatively, Foster would like to see improvement.

Although it’s interested in serving programmatic ads on its mobile app, Tinder, Match is working with just one third party at the moment: Facebook Audience Network, which it brought on in February. No one else has a solution that comes close – yet, Foster said.

Foster talked with AdExchanger about how Match Media Group thinks about the user experience for its apps, how brands are changing their view of dating sites and the differences between mobile web and app advertising.

AdExchanger: Tinder started experimenting with native ads just a couple of years ago. What ad experiences are available on Tinder right now?

PETER FOSTER: Today we are monetizing Tinder in two ways. One is in our direct business, which has a number of native ad opportunities within the [credit] cardstream. We have autoplay video, but it runs full-screen.

The other is a display native unit that acts as a card, and when you right swipe you get a message or match. It feels very native, and we’ve had a lot of success. Because we are very concerned about the core user experience, we’ve kept ad frequency a lot lower than other folks.

We also use Facebook Audience Network. Even at a low ad frequency, we have a ton of volume around the world. We did that deal to monetize knowing we weren’t going to fill every impression [we could].

Figuring out how to create a less intrusive ad experience has been an area of focus for publishers combating ad blocking. How do you test out the ad experiences and figure out what’s the right ad load?

Unlike publishers that are 100% ad revenue-supported, we have a very easy metric to measure, which is what happens to user behavior at certain ad frequencies. Do they upgrade to premium products at the same rate? Do they swipe at the same rate? How many spend as much time on the platform?

We want to find what ad frequency doesn’t affect the core users and the fundamentals of the company. That’s a much easier metric than what happens to CPM or how much money can we make.

Facebook has talked about running out of room to increase ad load in the future. With your scale, are you in a similar position, where you have more ad inventory than you choose to fill at a given moment?

For our direct business, we are not constrained in supply in the near  or medium term. We are continuing to grow [sales], particularly in Tinder, which tends to be a focus of a lot of that direct business.

There is a lot of room to add impressions on the third-party side with Facebook as well. We are being deliberate about testing and rolling that out, again with a user experience focus. I don’t see us being constrained from a supply perspective anytime soon. But at some point, everyone has a maximum amount of ad impressions they can generate assuming there’s no more growth.

What’s different about monetizing via mobile app vs. mobile web?

For us, the difference is more about the properties. Tinder is 100% mobile app. What’s been surprising is finding the right tech to participate in the middle, in between those two [mobile app and mobile web].

How do I do bidded mobile native with a beautiful execution that works consistently on a platform that everyone’s plugged into? I think the market is coming along, but there is no established perfect framework to draw on.

Why is it so difficult to execute bidded mobile native?

Programmatic native is more complicated. You’re rendering multiple assets at a given time. In a bidded environment, you have to be prepared to do that for a number of different ad executions, and that’s more complicated than the web, where when you win the auction your third-party tag serves the creative.

Can anyone else besides Facebook deliver that bidded native experience at scale right now?

We would like to find the perfect partner to solve that problem. Facebook runs bidded native really efficiently. I need a solution that can come as close to that as possible: Here’s my set of assets. The ad renders differently on Tinder than publisher XYZ. The creative serves quickly. The measurement components are in place.

I don’t know that we’ve found the perfect solution, but we are having great conversations with the market to get to that point. I don’t think there is any ad tech company that would disagree that there is real value in being able to deliver a seamless native experience on quality places like Tinder through programmatic means.

The direct-sold, IO business is undergoing an industrywide decline. What are you seeing there, and what is your strategy?

We see a tremendous amount of activity on the IO and RFP front still. There are certain verticals that are going to be more endemic and interested in the dating world than others: CPGs, not financial brokerages.

The reason why an antiperspirant is relevant in a dating environment fundamentally makes sense. I think that will exist in programmatic as well. If you are buying something through a pipe, you need to understand the context in which you are buying it.

Over time, there will be an evolution in how those programs are executed. The notion of programmatic direct makes sense, but it hasn’t really taken off yet. Part of that is being held back by tech, but also inertia in terms of how to come up with a contract from a brand perspective, solicit proposals, etc.

Dating traffic can be viewed by some marketers as not brand-safe. How do you see that playing out in your programmatic and direct business?

Less and less is that an objection we hear. It certainly comes up from time to time. But it’s gotten to the place where it’s not the dark corner of the internet. By 2020, half of the population will be single. Not using Tinder or another dating product is now surprising because that’s the norm, using digital to meet people.

We are transparent about where our ads are served across the portfolio, give users the ability to pull down inappropriate content and are adding features to protect against that.

What blind spots do you have in terms of data?

As agency models have shifted, and trading desk models have shifted, particularly in programmatic, it’s been challenging to find decision-makers. There are accounts that make decisions only for a single brand or are using different tech than the holding company might use. On accounts where we think we can drive value, we need to make sure we are talking to folks making the decisions.