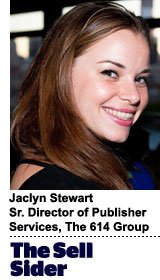 Today’s column is written by Jaclyn Stewart, senior director of publisher services at The 614 Group.

There is an ongoing contentious relationship between sales and operations in digital publishing that is well documented.

In a fast-paced, high-demand and increasingly complex media landscape, the pressure on publishers to set campaigns live with 100% accuracy on tight timelines often results in major rifts between ad ops personnel and their sales counterparts.

While nothing can completely eliminate the occasional tension caused by the high-pressure nature of our business, there is one measure any publisher can take to create internal transparency between departments and level set expectations of all departments working together to execute digital campaigns. They can create internal service-level agreements (SLAs) between sales and operations.

An SLA is a set of service standards established and mutually agreed upon between a support department – ad operations, in this example – and the department that receives the support, which would be sales.

An SLA lays out exactly what services are provided by the support department and the manner in which these services are requested and delivered. It also establishes quality standards and provides measurement criteria and KPIs for how success will be evaluated. In addition, it defines request submission requirements and standard response and turnaround times for requests and outlines an escalation path for urgent or outside-of-the-box requests.

An effective SLA is regularly reviewed by operations and sales management to ensure it still meets the demands of the business and allows both teams to discuss performance based on its agreed-upon KPIs.

While many publishers have internal business rules that dictate lead times or documented standards for how to submit requests to ad ops, for example, few publishers approach internal SLAs with the thoughtfulness and rigor required to maintain a productive working relationship between departments. To reap the most benefits from an internal SLA, both management teams need to work together to establish an initial SLA, monitor its effectiveness against KPIs and meet regularly to make updates based on evolving business needs.

For example, a publisher may be experiencing a 10% human error rate from its trafficking team. The sales team, however, often sends creative for campaigns past the three-day lead time established by ad ops to ensure it has enough time to reasonably traffic campaigns.

During the SLA development process, a sales leader and ad ops director outline all the responsibilities of their departments during the campaign trafficking process. They determine that while 100% accuracy when trafficking campaigns is always the goal, a human error rate of 5% or less is the new KPI to measure the trafficking team against. Conversely, the ad ops team will expect that in order to meet its goal of a 5% error rate or less, it will depend on sales to ensure a three-day lead time 90% of the time.

During the SLA development process, the sales leader and ad ops director will also agree on measurement based on their reporting capabilities and the frequency that they will meet to review the reporting and SLA. During these regular reviews, each team leader now has a baseline expectation for their team’s respective performance. The SLA provides a constructive framework for them to discuss, identify and address underperformance or recognize success when teams are meeting or exceeding their goals.

The industry has concluded that transparency strengthens relationships between publishers, advertisers and consumers. The same is true when you apply a full-transparency philosophy internally.

If a sales team is clearly aware of the roles and responsibilities of its ad ops team through documentation in an SLA – and subsequent training once it’s finalized – its expectations of services rendered from ad ops are level set. It also becomes clear what is expected from sales to receive the level of service they need and expect to deliver to their clients. An SLA moves from transparency to accountability by making it clear how success is measured and reported on.

Post-SLA, if a sales rep complains to his or her manager that campaigns aren’t going live on time or there is a high rate of error setting the campaigns live, the sales leader and ad ops director can look at how both parties are conforming to the SLA and evaluate appropriate next steps. Perhaps the sales rep is only sending assets on time 60% of the time and causing the ad ops trafficker to rush through setting up their campaigns. Maybe the ad ops trafficker needs extra training in a specific area and a performance improvement plan.

Whatever the case may be, the SLA has established the framework to have productive conversations and tangible action plans to address these issues.

Putting It In Perspective

It’s important to note here that there will be exceptions to every rule, and while an SLA provides clear guidelines, it isn’t practical to expect it to be followed 100% of the time. An SLA shouldn’t be used to beat either party over the head every time an extenuating circumstance arises.

Management will need to manage the exceptions to the rule and mutually agree when and for what reasons exceptions are acceptable and remain closely aligned on their department’s success KPIs. The larger goal of implementing an SLA is to facilitate transparency and accountability on both sides and ensure both teams work toward the same objective.

With this achieved, some of the contention between sales and ad ops will diminish and there will be greater efficiency and better working relationships between departments.