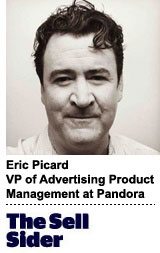 The first seven years of the programmatic revolution were driven by three major efforts.

It began with the creation and propagation of the massive new infrastructure needed to support real-time bidding. That was followed by the connection of all demand to all supply in the programmatic infrastructure. New ad products, formats and platforms then emerged, built on top of this new infrastructure.

This was a significant revolution – what I’ve called the third and fourth waves of ad technology. We’re now entering a fifth wave: privileged programmatic.

As the programmatic ecosystem matures, we’re seeing massive adoption of these new tools and technologies by the largest advertisers and media agencies now spending at scale. During the first seven years or so, many ad networks procured and resold media and some large marketer early adopters broke ground – many of which are now reaping the dividends.

But the very largest budgets are now coming into programmatic, and the game is changing. To illustrate the change, let’s talk about the historical evolution that the financial markets went through as they hit their maturity threshold during the rise of electronic trading.

In the highly recommended book “Dark Pools: The Rise of the Machine Traders and the Rigging of the US Stock Market,” by Scott Patterson, there is a clear narrative that will start to feel familiar to those working in programmatic media.

When the electronic markets were created, the early winners were typically hedge funds established and managed by the same humans who built the electronic market infrastructure. They knew that traders that responded the fastest to auctions could get significant advantage over other participants. Thus began the high-speed trading (HST) revolution. High-speed traders made millions of dollars a day on high-volume trades at very high speeds.

As the market matured, large traditional stock market players entered the electronic trading business and had their lunch eaten by the upstart high-speed traders. They found this to be unacceptable. The basic logic was, “If I’m spending billions of dollars a year on your electronic exchange, I need some privilege that gets me ahead of these little upstarts who have ‘know-how’ but are tiny players compared to me.”

The biggest players went to the exchanges and demanded privileged bidding mechanisms to allow them to win in the auction even if another player bid higher or bid first. They removed the advantage built in by the high-speed traders.

Nobody warned the HST companies. Within weeks in some cases, many simply went out of business. They had no idea what happened, but knew they suddenly weren’t winning in the auction. Eventually a few found out that the unpublished bid mechanisms that allowed them and the large brokerages to win in the auction had been uncovered and made available more broadly. But most of the damage was already done.

Privilege in an auction environment is not necessarily a bad thing. Much like the RTB exchanges in advertising, the electronic markets were seen as the great equalizers – fair unbiased auctions – but the reality is that the HST companies had their own type of advantage based on infrastructure knowledge. A real business argument can be made that buyers spending vast amounts of money should be able to negotiate for privilege with the sellers. That’s exactly what is happening in programmatic advertising.

Have you noticed that many of the biggest early players in programmatic have come upon hard times? Suddenly algorithms that were designed to provide advertisers with performance while still stripping off big dollars via an arbitrage model stopped working. Why?

Over the last few years we’ve seen the massive adoption of new privileged mechanisms in programmatic. Whether we discuss private marketplaces (PMPs), header bidding, first-look or programmatic guaranteed, they are predictable artifacts of the maturation of the programmatic marketplace. And don’t let any early knowledge you’ve gathered on these mechanisms create a false sense of comfort – PMPs from three years ago often look nothing like the configuration seen today. These mechanisms are not created equally.

For publishers, this maturation is very good news. Many large publishers viewed programmatic as a “rush to the bottom” in the early days and now see programmatic mechanisms bringing balance back to the marketplace.

Many publishers expressed frustration as programmatic created for the first time in digital media an information asymmetry that favored advertisers. Publishers had no idea why advertisers bought media from them over the open exchange, and now with these privileged mechanisms, the conversation has moved back to media buying and sales teams are empowered to negotiate and structure deals that drive customer value.

The hallmark of the first seven years of programmatic was a bottoms-up reinvention of buying based on data-driven decisioning and performance – and the biggest lever on performance was price of inventory. Early adopters were astounded to find their desired audiences for a low cost on the exchanges, even at the same publisher sites where they were simultaneously executing direct buys at much higher prices.

But those same savvy early adopters who realized huge discounts by buying the same users on the same publishers over the open exchange saw the writing on the wall. They recognized that prices were rising on the best users as the competition in the auction rose – since unsurprisingly, the same users seemed to be of interest to all advertisers in the same sector.

The savviest advertisers went directly to publishers and made PMP deals to access inventory with mechanisms that gave them advantage over their competition – which is also known as privilege. By putting their PMPs in increasingly higher priority within the ad server, setting up fixed-rate, variable and hybrid-rate deals and using new tools like header bidding, the most knowledgeable buyers stayed ahead of the competition. Publishers saw that these new mechanisms drove much higher CPMs, in many cases higher than direct buys, and importantly gave them insight into why advertisers bought from them. Eventually, the very most desirable audiences on the largest and best publishers evaporated out of the open auction.

The market is tipping over on itself – with open auctions being relegated more and more to purely direct-response advertisers that are not selective about which publishers their advertising runs on. For large brands, especially those spending large budgets, which also tend to be those that care deeply about running ads on high-quality publishers, things have gotten a lot more sophisticated.

Programmatic is no longer about low-cost inventory; it is now the infrastructure for transaction where the buyer and seller are handshaking and establishing connections to the consumers that brands need to reach. Programmatic is the mechanism to bind together the new tools that empower the advertiser to take control of their audiences and apply real science to the art of advertising. Publishers now can gain insight from working through these mechanisms rather than being left in the dark.

Sophisticated publishers already know this – and are driving programmatic elements or line items in their core I/Os as part of their direct business. On the buy side, the trend is for agencies to blow up their trading desks and embed programmatic buyers into direct buying teams.

This is a clear wake-up call for publishers that are still not treating programmatic as part of their direct sales or which haven’t changed sales compensation to remove channel conflict. Same for advertisers and media agencies who are segregating their programmatic buyers from their direct buyers.

Deal design has gotten extremely sophisticated, and the trend is toward increased sophistication, not simplification. If you are driving programmatic sales at a publisher and your deals are very one-dimensional, you’re probably missing something.

If you’re buying programmatically today and haven’t analyzed the core audiences you’re reaching over the open exchange, broken out by publishers that you’re also buying directly from, you’re behind your competitors.

And if you’re a marketer, question your media partners about all of these things. You have time, but not very much.