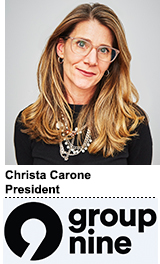 Digital media companies who bet on social distribution and video have fallen on hard times, but Group Nine Media is angling to be the exception.

Group Nine, whose brands include Thrillist, The Dodo, NowThis and Seeker, has developed a holding company model designed to reduce costs by sharing backend resources – while still efficiently reaching fragmented niche audiences across the web.

And a holding company model is more attractive to experienced executive talent. One of those new leaders is President Christa Carone, who joined a year and a half ago. She spent 20 years as a marketer for Xerox and Fidelity Investments, then led content agency Group SJR as Chief Operating Officer.

“I’ve always been very focused on how a brand could break through with storytelling– primarily because I was in the B2B space,” Carone said. Thought leadership or a narrative lens was key to connecting with a business client.

]When she switched to the agency side, she saw how great narratives were undermined by lack of distribution.

“Brands were building libraries of remarkably thoughtful content, but not paying attention to a distribution strategy,” she said.

At Group Nine, Carone hopes to continue marrying fantastic content with extensive distribution. She talked to AdExchanger about Group Nine’s place in the future of digital media.

CHRISTA CARONE: It’s still an important part of an integrated marketing mix. We need to provide a full suite of advertising solutions for marketers, where native advertising helps with the top of the funnel and other ad products bring the consumer down to the point of conversion.

Group Nine is selling its platform inventory direct to brands. What compels brands to buy your Facebook or YouTube content when they can buy directly from the platform?

When brands buy on the platforms, it’s a very efficient buy. Brands want to make sure they’re getting efficiency, but also bring in a qualified lead – and they can do that better when they’re aligned with NowThis, for example. When you’re buying on a platform, you don’t know where your content is showing up.

Our approach is to bring content to any and all places viewers are. We are monetizing over 20 platforms. We have “InstaChef” launching its second season on Amazon Prime Video, as well as “Really Dough,” a pizza show. The Dodo has been exploring some distribution through TikTok, and looking at programming specifically for that. We’ve been programming on for IGTV. We have content distributed on Pluto TV and Roku.

It’s heavily into social. But we don’t want to be overly dependent on one channel vs. another. Going into 2018, we had a lot of distribution on Facebook. Closing out the year, we had more equal weight across channels. I’m super impressed with the progress we made in that area. Every brand worked to diversify. We grew Snapchat in a meaningful way. NowThis grew meaningfully on YouTube. Seeker, a YouTube brand, created and built a community on Facebook.

Many of Group Nine’s peers have gone through hard times in the past year, including layoffs. Why have you been able to weather the storm?

Consolidation needed to happen, and Group Nine created an infrastructure to support each of the brands. We have sales and marketing, product and tech, audience development and insights. It’s a very corporate operation, and handles all that stuff that our brand leaders don’t have to worry about. For us, it wasn’t a pivot to video. NowThis, Seeker and Dodo were video-first brands, and we think of “dreaming in video,” and believing it would be the hero format.

Many publishers stepped back from social media. Why is Group Nine bullish?

Social is the new pipes of distribution. We want to go where the audience is spending their time vs. asking the audience to go to our O&O infrastructure.

How do you think about the risks in relying on social distribution?

If Facebook sneezes, I don’t want Group Nine to catch a cold. It goes back to diversification: not being reliant on one platform, and making sure we are not overly comfortable in one place.

What’s your take on comments from BuzzFeed CEO Jonah Peretti and Group Nine CEO Ben Lerer about the two merging?

This is a small industry, and a couple of big players, and they know each other. [Lerer and Peretti] talk all the time, and it doesn’t mean that equates to anything as buzzworthy as those headlines. Group Nine was established as a family of brands, with the possibility of growing – our job is always to do our diligence in the marketplace. In terms of the BuzzFeed rumors, they’re just that: rumors.

Where do you see brands shifting their ad dollars?

The market is shifting to “winner-takes-all.” Brands are taking bigger budgets and giving them to one to two publishing partnerships a year with a lot of custom activations.

Big partnerships can be resource-heavy. Advertisers are starting to understand that the more investment they put into their publishing partnership, the better results it provides for them.

How do publishers deal with the resources required to respond to 50 RFPs to win one deal?

For Coke’s holiday campaign, we had a significant partnership. We saw that the audience [Coke wanted to reach] was much more multigenerational than Thrillist.

The logical thing was to bring in Food Network and OWN [owned by Discovery, a key investor in Group Nine] to meet the audience segments important to the client. I would rather be in a position where I am showing the client that we can be completely collaborative and super innovative in how we bring this to life.

Are brands more rigorous around measuring the success of content-driven campaigns?

Increasingly, as we are doing more down-funnel ad solutions, they are tying it to a performance marketing KPI. We have also worked with direct-to-consumer companies recently where they tracked “add to cart,” and see whether or not it’s moving the consumer into the advertiser’s purchase funnel.