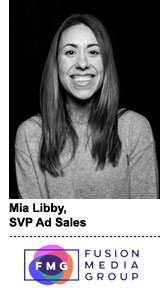 Publishers need scale to survive. Fusion Media Group is an example of that strategy in action.

The modern Fusion Media Group is about a year and a half in the making. Univision first expanded by buying The Root from The Washington Post, and then a stake in The Onion.

In August, it bought Gawker Media for $135 million in a bankruptcy sale after the publisher lost a lawsuit against Hulk Hogan. The Gawker sites – Jalopnik, Kokatu, Jezebel, Deadspin, Lifehacker and Gizmodo – became part of the Gizmodo Media Group (GMG).

Mia Libby led advertising at Gawker Media for four years before the transition. At Fusion Media Group, she manages a team of 30 as senior vice president of ad sales.

“Most of the deals we do are rooted in one site or two sites, but we are always tapping the wider audience,” she said. “We also have the scale of each media group behind us and we leverage that for every partner.”

Fusion is also big on diversified revenue. One-third of its annual revenue comes from the $200 million in sales it drives through its affiliate and commerce business. And it also has two content studios to produce sponsored content: Onion Labs helps brands use its distinct flavor of humor, while Studio@Gizmodo serves the rest of the sites.

AdExchanger: What’s the integration into Fusion Media Group been like?

MIA LIBBY: It’s been very seamless, largely because The Onion and GMG were run like two small companies without massive cash infusions. They were both run on shoestring budgets, with the mentality that every person from the top down should get involved in any project, sales call, any RFP, any pitch, anything that would move the needle.

Why does it make sense for Univison to own Fusion, the six Gizmodo Media Group Sites, The Root and The Onion?

Audience has become a really important part of the way advertisers buy. Context is becoming secondary to audience. We have 87 million [comScore] uniques, more 25-34-year-olds than our competitive set, and more of those that earn more than $100,000 a year, which is an audience that most of our brand partners are having real difficulty finding.

NBCUniversal’s sales teams have been trying to connect TV and digital. What’s the vision for Univision in connecting TV to Fusion Media Group?

Have you referred clients to each other? Is that step one?

Absolutely we have referred clients to each other. Step one is tapping our very large and deep relationship on both sides and finding ways to include the others where it makes sense.

Gawker has had its share of brand safety issues over the years. Any tips for YouTube as it attempts to win back the trust of advertisers?

Back in the Gawker days, we knew that to get blue-chip advertisers we would have to come up with a strong strategy to avoid unfortunate adjacencies.

We developed a system where when certain words appear in any headline, it triggers an auto-collapse in DFP. It’s not even subject to a manual review. Even if something is published in the middle of the night that’s inappropriate for an advertiser, the ad will never appear.

This goes for not only stories we would publish, but also terrorist news or an airplane crash. Those stories are worth covering, but we are still going to collapse ads around it, because we know our brand partners don’t want to be associated.

What’s your prediction for VC-backed publishing, and how some of those big investments will shake out?

No amount of money can buy you a loyal, dedicated audience. That is the most crucial centerpiece of any premium publisher business right now. If you don’t have that, and you don’t have that at scale … I don’t see those sites being long for this world.

Audience is becoming a commodity. If you can buy the right eyeball anywhere on the web, premium publishers like us have to find our on unique value propositions.

The Atlantic recently decided to sell direct on YouTube. What’s your strategy monetizing on platforms?

We are certainly moving toward the YouTube option [of selling direct on the platform]. YouTube is a great option for building scale with video. We are in the process of scaling the video team on the Gizmodo Media Group side. As they continue to churn out views, YouTube will be something we start to tap as a way to sell clients directly, because re-roll is a hugely important assets for brand partners.

How is programmatic affecting your business?

We are more than happy to kick all the media elements over to programmatic guaranteed to make our lives easier and our clients’ lives easier to transact, and be able to optimize in real time. Certainly, it is a hit when more and more business is going programmatically, because as CPMs go lower, it can be hard to make up that delta.

Our programmatic team just doubled in size from one to two people. So our direct sales team is also our programmatic sales team. They are educated to, empowered to and expected to sell programmatic. And they get paid on programmatic in the very same way as they do on direct business.

Our programmatic team is there to be the experts and have the more technical conversations, but we had to set it up so that it all the budgets were going programmatic they felt as if they were losing the business.