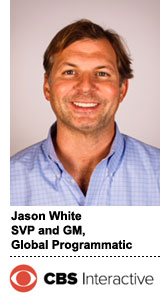 Programmatic is suffering from a crisis in confidence from marketers. And that crisis affects premium publishers like CBS Interactive.

But there are solutions on the horizon, according to Jason White, SVP and GM of global programmatic revenue at CBS Interactive.

Header bidding, for example, will boost transparency in the marketplace and even the playing field between buyers and sellers. Ads.txt will eliminate domain spoofing and reduce fraudulent inventory. And publishers will finally start joining forces to take on the duopoly.

Before the creation of Ads.txt and CBS Interactive’s implementation of it, the publisher constantly saw video inventory on programmatic exchanges claiming to be from its sites.

“We partnered with Google to turn our ad server off,” White said. “We flatlined it, and then Google’s platforms would see our impressions for sale.”

Although CBS Interactive works with Google on industry initiatives and uses Google’s ad exchange and ad server, it also views Google and Facebook as serious threats to premium publishers.

Buying on Facebook is incredibly easy – “Your grandma could do it” – and marketers have access to better data, especially on mobile, White said. Publishers need to develop comparable offerings.

“As a community we understand we have been divided and conquered,” White said. “In the next year, there will be more cooperation between premium publishers.”

White talked with AdExchanger about how header bidding will lead to greater transparency and why publishers should collaborate to take on the duopoly.

JASON WHITE: Header bidding ironically helped bring full transparency on both sides. If you look at Wall Street, the only way you can have a full and equitable model is if you have 100% transparency.

Header bidding not only helps things from an efficiency and yield perspective but balances the tables.

The demand side had effectively all the leverage up until that point. They had data about how many of their users were on our site. We also lacked liquidity.

All the DSPs would aggregate bids inside their platform, but only send one bid. So if there were five DSPs in the market, we only had five bids. Technically, we had millions of advertisers, but only a handful of bids came through. Since it’s a second-price auction, we would have a $100 bid, and the second-highest bid of $2, so we would sell that impression for $2.01. Anyone can agree that’s not a fair trade.

We viewed header bidding as a way to combat that and bring in more liquidity. It’s worked fantastically, and yields are up significantly. And the conclusion to that, if you look forward, is that you are starting to see the world move to a first-price auction.

What role do publishers play to advocate a first-price vs. a second-price auction?

We are agnostic as long as we get a fair and equitable auction. From our perspective, it’s really the platforms’ decision, but we would encourage sell-side platforms to be very transparent and not be cagey.

Does a first-price auction solve for the bid density problem?

The move to first-price will cause consolidation among all the header bidding partners in the wrapper. That would not be good for the publisher, because we want to capture what the true price is. The move to first price will offset that.

Where do publishers still lack visibility compared to the buy side?

We can set floors on the advertiser level, but don’t understand what cohorts advertisers are targeting. We can’t action that, and that is absolutely the primary way they are buying. They understand the available inventory of our users on our site, and we don’t. That needs to be adjusted as we move to a more transparent marketplace.

How can publishers gain a better understanding of what kind of audiences buyers are bidding on?

That [guaranteed audiences] future won’t scale unless that’s true. We won’t be incentivized to negotiate against ourselves. We have told all the sell-side platforms that the technology and insights need to be in place for us to have fair and equitable transactions.

If header bidding has helped boost yield for publishers, could Ads.txt do the same thing by constraining supply?

What will be the adoption curve for Ads.txt?

I don’t see slow adoption. Other broadcasters have all said they are going to move forward. The Trade Desk and DoubleClick Bid Manager are incorporating the spidering technology behind it. Those two are the 80-20 in terms of demand. And CBS Interactive as a network represents 60% to 70% of the web.

Besides header bidding and Ads.txt, what other publisher issue is most important to you?

Mobile monetization. We have more usage that’s going to mobile, and we have seen the numbers from Digital Content Next and Mary Meeker for how many cents out of every dollar are going to Facebook and Google. How the publisher community takes more market share away from that is our laser focus.

CMOs need more than two options for where to place their dollars. Facebook and Google don’t have premium content. The area we think is green space is bringing that [publisher] data at scale together. Then all boats rise, and CPMs for premium publishers skyrocket.

What technology will help publishers get that “data at scale” needed to take on the duopoly?

Right now, when you come to a page, we’re paying a tax with pixels. The sell-side platform has to sync with the demand-side platform so they can target their advertiser’s ID on our inventory. That means there are 400 calls on our page, and we have to bear that burden.

If there is an ID that makes that go away, we will embrace that. And if it turns out there are five IDs instead of the 400 calls, so be it. That will still be a win for everybody. There will be faster calls and more customer matching for marketers. For us, it’s less latency and load on our page.