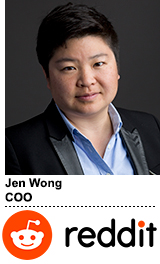 Brands are being tough on platforms, pulling advertising dollars after brand safety fiascoes and thinking critically about appearing adjacent to unpredictable content that can expose them to brand-safety risks.

Reddit “reset” when co-founders Steve Huffman and Alexis Ohanian returned to run the business, said COO Jen Wong. She joined just under a year ago from Time Inc., impressed by how they had rebuilt its tech stack and added a layer of policy to the social platform.

Reddit provides a venue for passionate people to congregate and share ideas, but it’s also allowed fringe theories and groups like Pizzagate and white supremacists to gain momentum.

Under its current leadership, Reddit has more aggressively banned those groups outright or quarantined them to prevent those ideas from spreading. Each of Reddit’s 140,000 communities is moderated by one to several hundred people. They prevent trending posts from appearing on Reddit’s homepage unless the posts adhere to the rules of their individual community.

In addition to policing its platform as a whole, Reddit deems only a subset of its communities safe for advertising. And it’s been a first mover in protecting its community from unsafe ads, banning cryptocurrency ads well before Facebook did.

Reddit’s policy efforts, as well as a more built-out ad platform, are luring more brands to the site. Wong spoke to AdExchanger about how Reddit is expanding its advertising offering.

AdExchanger: What’s the past year been like for you?

JEN WONG: We have done a tremendous amount of building. We redesigned the site, which unlocked a fair amount of user growth last year. Redesigns can go tremendously well, or not. Our redesign looks great. For advertisers, it’s more visual, modern and cool.

We also created the ability to make your own video and upload it, and we’ve gone from zero to 1.5 billon video views a month. We created a video product around that, and video is now 40% of all ads.

For a long time, Reddit was perceived as a huge brand-safety risk. But those concerns seem to be diminishing, while platforms like YouTube are considered more risky than ever. What’s behind that change?

For a long time, people were not familiar with what we do on the safety front, and how our information architecture is different from other platforms. On the base level, we have policy and folks that communicate and enforce that policy across Reddit. The next level is community moderation.

How is Reddit’s approach more privacy-safe than other platforms?

First of all, we do not force you to log in or give a piece of identity information to use the product. That’s fundamental, and it’s about choice. From an advertiser perspective, we have differentiated targeting because of the strong interest graph.

People go in to explicitly subscribe to topical areas. I subscribe to Polaroids and indie rock and parenting. We have a strong data graph of me and my interests, but we are targeting at the interest level, not the individual user level. We do have list-based targeting. But most folks come to us because of the interest graph.

There’s also the perception that the Reddit community is less friendly to ads compared to the followers of an Instagram influencer, for example.

We have Reddit Premium, so users have the choice to turn ads on and off. The majority choose ads. The second part is we have done a really good job, in dialogue with the community, designing the promoted posts and how they are labeled. We provide guidance to brands on what appropriate citizenship looks like. When that’s done correctly, Redditors are perfectly OK with ads.

What is the vision for biddable advertising on Reddit?

I’ve definitely heard that. When platforms are building their marketplace – and it’s early in the lifecycle of auctions and bid density – there is efficient, unduplicated reach for everyone. If you’re on the early side, there is even more efficiency. Our partners that have been with us in a big way for the past couple of years have benefited from that.

In which advertising categories do you see the strongest adoption?

It’s driven more by our geography and location in San Francisco. Because we are a West Coast tech company, our clients are on the West Coast. Reddit does have strong tech, entertainment and gaming communities – that’s what we’re known for – but we have a lot of auto, finance, food and style, too. Now we have offices in Chicago and a big presence in New York, and we’re seeing more diversification in sales categories.

Are you familiar with the ad ops community on Reddit?

Yes! That’s like the place where AdMonsters was born.