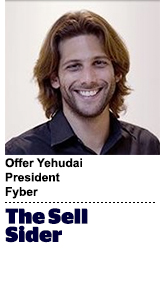 Today's column is written by Offer Yehudai, president at Fyber.

At first glance, these acquisitions can be viewed as ad networks recognizing consumers’ mobile preferences and following their lead. Criteo, for instance, has long been the poster child of the desktop ad tech world. But now that mobile apps dominate consumers’ internet time, the company needs a strong mobile solution.

But it’s hard not to see a bigger issue at play. In a world where Google, Facebook and Amazon control most digital inventory, ad networks are thinking about their long-term viability. Relying heavily on Google or any other company for supply poses risks.

Will they be able to secure the inventory they need to fill client campaigns? Without transparent auctions, how do they know if they’re getting a fair shot at the placements their clients need? These acquisitions could be seen as efforts to secure the supply chain for their own customers.

It’s completely understandable that ad networks would want better control over their supply chains; as a public company, Criteo has an obligation to its shareholders to protect their investments, which means ensuring sustained growth. Access to a robust supply chain is essential to that growth. And for some mobile app publishers, a single platform that serves both the supply-side platform (SSP) and demand-side platform (DSP) offers a compelling level of seamlessness and convenience.

But not all mobile app publishers share that view. For many, this trend sets off alarm bells, which is why some have hesitated to embrace these newly merged companies. The more sophisticated mobile app publishers are asking themselves: Is this good for us, or are we better off with a clear separation between church and state? It’s an interesting question.

Mobile app publishers expect their sell-side platforms to have their best interests at heart, which means doing what they can to sell their inventory at the highest price possible. Ad networks, on the other hand, sell to advertisers, who naturally want to purchase their audiences at the lowest possible price. There’s an inherent conflict of interest.

If the platform for the SSP and the DSP are one and the same and there is no Chinese wall, who is the actual customer? Is it the advertiser who seeks the low costs or the publisher seeking higher prices?

Elsewhere in the economy, we recognize that buyers and sellers have opposing interests and require that each be represented by separate advocates. For instance, in most states it is illegal for a real estate broker to represent both a homebuyer and home seller. Each party must have separate representation to ensure a fair transaction.

The ad network side of the in-app ecosystem is becoming commoditized. If you're an ad network in this space, it is very difficult to differentiate yourself and win more ad budget from advertisers. The future shift to in-app header bidding will only strengthen this trend.

So, those acquisitions are really about capturing more parts of the value chain and getting closer to the publishers. It is true that these companies' ad network business is competing with other networks (or other types of buyers, such as DSPs) to win and serve ads on this inventory. But, it also gives them an opportunity to get access to more inventory and then, theoretically, give preference to their own network, especially in a waterfall scheme. Technically speaking, they can also do it in a unified, “real-time” auction environment.

Another potential reason for this move is that these networks imagine a future business model in which they charge the publisher for providing the mediation software or service. This move will enable them to move from competing over advertisers, which is becoming extremely difficult – especially with Google and Facebook – to competing over publishers.

It’s too early to see how this development will play out. As I mentioned, some publishers may like the simplicity of having a single platform that represents the buy side and sell side, and perhaps these newly merged companies will see their customer ranks swell. Or, publishers may remain on the sidelines, waiting for some kind of indication that their interests will be protected.