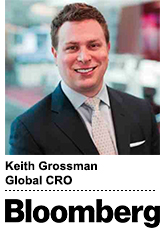 Name a trend in digital media, and Bloomberg’s tried it in the past year: digital subscriptions, live events, agency-like strategic advisory services, podcasts, social media-distributed video and, of course, OTT.

“The single most important thing for us is finding the right balance of revenue streams for our organization and thinking about maximizing and future-proofing where our revenue should be coming from,” said Global Chief Revenue Officer Keith Grossman.

Bloomberg Media wants to be profitable on its own, and not just because it’s part of the company selling subscriptions to the Bloomberg Terminal for $24,000 a year .

Holding out for opportunities with a better value exchange has had its benefits. TicToc, its ad-supported news network on Twitter, averages 2 million daily views. The show spun out of Bloomberg’s coverage of the 2016 presidential debates, followed by a few live shows a day. It’s testing Facebook Live with the show “At What Cost?”

Bloomberg doesn’t require viewers to authenticate to watch its digital video channel, unlike rival news networks, which enabled it to build a strong video supply just as the OTT advertising market heats up.

Bloomberg’s sell-through rate on OTT rose to 68%, this year compared to 24% last year. “We have been scaling up our OTT inventory and distribution for the past few years, even as the marketplace wasn’t there. That bet is starting to pay off,” Grossman said.

Grossman talked to AdExchanger about the bets Bloomberg is placing to grow its digital media business.

AdExchanger: In the past, Bloomberg has held the position that it won’t put content on platforms where there’s not a fair value exchange. Is TicToc’s success the reward for being a social media holdout?

KEITH GROSSMAN: I’ve always been wary of why one should be the first onto certain platforms. In the case of Twitter, they have been incredible partners throughout the TicToc integration.

In the case of early publishers that jumped in with some of the social platforms, the rationale wasn’t aligned with the long-term vision of where the organization needs to go.

We are fortunate. We are a media company that sits within a larger data technology company. We are private so don’t have to go in front of shareholders every quarter and say, “Look at this crazy innovative thing we are doing – this means we are innovative!” Instead, we can step back and look at the landscape [first].

What’s next for TicToc? Does it stay an ad-supported model?

TicToc year one has been pure sales. We are beginning to work on distribution deals to extend where the TicToc reach will be. The TicToc brand launched with Twitter, and it will anchor there but push out into other areas as well.

There is no reason why TicToc should not be on airport TV screens. It makes sense to be there, and there may be a distribution deal that helps build the brand. That’s how we’re thinking about it.

How does advertising co-exist with Bloomberg’s new subscription model?

When we put the paywall in place, we looked at power users, the people who were consuming the most Bloomberg content. It’s at 10 articles a month, so it’s a relatively loose subscription model. Ops, sales and ad ops all worked together to make sure we weren’t cannibalizing inventory.

In most instances, when you do a subscription model you manage supply and demand. In our case, because we are not a traditional media organization and we have one of the largest newsrooms on the planet, we actually take a very small percentage of our content and make it public.

We produce 5,000 articles a day and only put a tiny percentage into the public space. The rest is designed for the Bloomberg Terminal. In any instance we would find ourselves challenged from an inventory perspective, we can [ask], “Do we need to release more supply?”

Would you also change the paywall to adjust supply?

We’re going to play around with it to understand what is the right balance.

What’s the data opportunity for Bloomberg?

The data topic is my favorite topic. We hired Michelle Lynn two years ago from Dentsu Aegis, and she built Bloomberg AIQ, an AI analytics tool. Every person in our organization has access to this, whether you’re in the United States, India, you’re a seller or in ops. Everyone uses it slightly differently.

What AIQ allowed us to do is look at over 30,000 journals and periodicals around the world and suss out editorial themes. We can identify whitespace opportunities for our partners around how they are being perceived in the news. We can look at the content that aligns most closely to our partners’ desired outcomes. When we put together plans, we can think about how we should be targeting. The AI aspect of AIQ ties into the artificial intelligence, and the IQ is the human element – and we have been hiring a lot of strategists in the past year.

Tell me about that strategy and consulting business.

The consulting work allows us to think about our audience through the lens of insights. Sometimes insights can be bought without media, and sometimes they are applied to media. The hardest part of the consulting practice was the realization that sometimes, when we are given a challenge, the outcome won’t always be Bloomberg Media.

Where we differentiate ourselves from the consulting practices, from an agency and from a media player is that we can actually do end to end. We can start the conversation, and mine the insights from the 100 billion data points a day we sit on, and we can bring that to life in terms of insights and strategy work, which can be applied to media or events and other activations. We have the end-to-end capabilities.