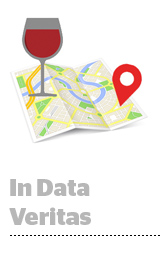 “SMB” is not the first thing that comes to mind at the mention of SAP.

But the enterprise software giant is actively courting small and medium-sized businesses like Veritas Studio Wines, a two-year-old boutique vino shop tucked away on a side street in the Hell’s Kitchen neighborhood of Manhattan.

Veritas is plagued by many of the same questions and challenges facing large, multinational brands: Who are my customers? Who are my competitors’ customers? When are they in the area and where are they coming from?

Jeremy Kaplan, managing partner at Veritas, had theories based mainly on gut, intuition, observation and anecdotal evidence. But he wanted some real data to back that up – or to prove him wrong.

SAP enhances the telco info with map data and runs the whole business through its predictive analytics platform, HANA, in order to develop aggregated insights about the population moving through a particular area each hour, including where they live, demographic characteristics and device type.

But rather than looking at footfalls in front of its own store, which is located directly across from a large apartment complex that accounts for most of the foot traffic on the street, Veritas used the tool to get a read on the type of people flowing through the wider Hell’s Kitchen neighborhood and past its competitors’ store locations within an eight-block radius.

The results were surprising.

For example, Veritas was accustomed to opening its doors at noon because that’s what most of its competitors do. But it was putting strain on the store’s two employees, and Kaplan was on the cusp of hiring a third person.

Then Veritas learned that foot traffic in Hell’s Kitchen was relatively dead during midday, with a notable uptick later in the afternoon and throughout the evening. By opening the shop at 2 p.m. rather than noon, Kaplan has been able to maximize his existing staff’s time by overlapping their shifts during the busiest hours, and he saved the $30,000 in salary he would have had to expend to bring on another employee. The SAP report cost Kaplan less than $500.

“We saved money and improved customer service through one observation, which pretty much made this worth it for us right off the bat,” Kaplan said.

But Veritas also was able to go deeper into the demographics.

Kaplan had assumed that most of his potential consumers would hail from Hell’s Kitchen and adjacent ’hoods. While roughly half did come from the local area, a significant portion of people were from ZIP codes outside of Manhattan, including northern New Jersey.

Although it seemed odd at first that meaningful populations of Jersey people hanging around Hell’s Kitchen, it made perfect sense on reflection. Commuters using the Hudson River Ferry to get home – there’s a terminal down the road from Veritas – throng the area on their way to catch a boat.

As a result, Veritas has started handing out flyers at the terminal, and there’s been an uptick in business, Kaplan said. When someone on their way to the ferry is asked why they decided to pop into Veritas, the answer is, invariably, convenience. The wine shops in their hometowns are usually closed by the time they get home from work.

For now, Kaplan has been using these insights to better target his offline marketing efforts, but digital marketing is very much on his radar, he said. Veritas soft-launched its website in January and is researching a new point-of-sale system to integrate into the back end.

Even though small-business owners are notoriously time-starved, that doesn’t mean they can’t be smart about data and take advantage of whatever marketing tools are at their disposal, whether that’s SAP, Yelp or Google, Kaplan said.

“There’s been a fundamental change in the digital economy, and that’s around the democratization of offerings and services,” Tripathi said. “Small businesses don’t have to think, ‘Oh, we can’t do this because we’re small.’ They don’t need hundreds of thousands of dollars of marketing budget to learn about their consumers.”