Comms plans and product launches that were in place before COVID-19 invaded the world either need to adapt or be scrapped. It’s so easy to step in it right now.

That’s as true for consumer-facing brands as it is for B2B marketers and ad tech vendors looking for pickup in the trade press.

“Be very careful with your public relations efforts – your communications need to be meaningful,” said Doug Wood, a partner at Reed Smith and general counsel for the Association of National Advertisers.

Here’s how brands, tech providers and PR professionals are navigating the new not-at-all-normal of communicating with clients, consumers and journalists during a global pandemic.

Although it’s tempting to tack a coronavirus reference or two onto an existing media pitch and toss it out there as planned, most journalists will see right through that, not to mention readers and consumers.

But while the current situation calls for extra sensitivity, common sense is still the best practice, said Laura Goldberg, founder and principal of LBG Public Relations, a consultancy that focuses on media and marketing technology clients.

Know who’s appropriate to reach out to right now for potential press attention by reading, watching and listening to their current coverage and checking their social media channels, she said.

“Frankly, this should be a basic practice when it comes to press outreach under ordinary circumstances,” Goldberg said. “But this foundational work is more important than ever if you want to try to be part of the current news cycle.”

Ben Billingsley, founder of PR and marketing agency Broadsheet Communications, sent an email to his clients in mid-March urging prudence and advising that they delay noncritical announcements by two to three weeks in favor of focusing on communicating with their own employees, partners and clients.

“This is a unique time and you need to be cautious,” Billingsley said. “If you’re going to speak, make sure you add value and advance the conversation in some way.”

One way for companies to do that is to focus their communications on what they’re trying to do to help during the crisis, whether that’s supporting the medical community, buoying up small business or shifting their marketing to emphasize guidance form health authorities, Goldberg said, such as Nike’s “Play Inside to Play for the World” campaign or Coca-Cola’s social distancing billboard in Times Square.

More than 90% of brands surveyed by the Association of National Advertisers said that they have adjusted their creative marketing messaging since mid-March.

But some companies are forging ahead with preset plans, product launches and good intentions.

It’s not business as usual, acknowledged Mike Lisavitch, director of product at app monetization platform Tapjoy, but mobile publishers still need to monetize, and consumers still game during a pandemic – perhaps even more so.

That’s why Tapjoy stuck with the launch plan for a multi-reward cost-per-engagement product that came out in mid-March to coincide with the virtual version of the Game Developers Conference.

Simpli.fi, a demand-side platform for local advertisers, released an OTT/CTV attribution product a little over two weeks ago for similar reasons. The product has specific relevance for smaller advertisers, many of which are struggling mightily right now, said CEO Frost Prioleau.

“We have many brick-and-mortar customers that are pivoting their dollars to DTC and ecommerce-type solutions,” Prioleau said. “And I thought, ‘You know, this could actually be helpful to local businesses and retailers trying to get through a really difficult time.’”

Barring anything obviously gauche or ham-handed, it’s better to release products and promote them than not, he said. The economy’s at a standstill as it is.

“We’d obviously hold anything we think could possibly be insensitive to people who are suffering in any way,” Prioleau said. “But we’ll do as much as we can to continue delivering and communicating about products, which is good for the economy and our customers.”

Although Blenders Eyewear, a California-based company that produces sunglasses and snow goggles, is in a very different business than Tapjoy or Simpli.fi, it sees the current situation through a similar lens.

The world is in flux right now, but it’s not ending, said Chase Fisher, CEO and founder of Blenders.

The company moved forward with a big product launch in March. Blenders has a loyal fan base, Fisher said. Its customers had been anticipating its new collection for months and Fisher didn’t want to disappoint. 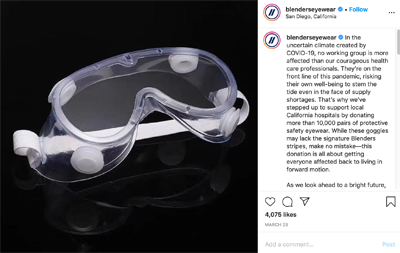 The messaging had to change. Promotional material makes reference to the crisis, but purposely keeps the tone light. Blenders also extended its return policy and quickly developed a content strategy that revolves around positivity, including at-home workouts and Ask Me Anything sessions with members of the Blenders team.

“People want to feel heard and they want to feel positive, because almost everything you hear right now is very heavy, negative, like the world is ending,” Fisher said. “We want to be a company you can trust through all of this.”

Which is why in early April, two weeks after the product drop, Blender put out a press release announcing a pledge to produce and donate thousands of safety goggles for medical workers at high-need hospitals in California and New York. Five percent of the company’s sales throughout April will also go to Direct Relief, a humanitarian aid organization.

“Communications these days have a lot less to do with promotion and sales and a lot more to do with community building and empathy,” Fisher said. “We’re mindful of the situation, we’re listening and we’re just trying to be as transparent as we can. What else can you do?”