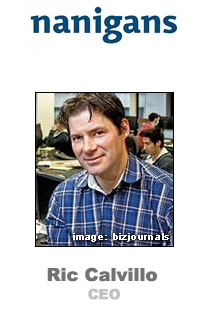 Describing itself as a Facebook Performance Advertising company, Nanigans has placed its future squarely on the results it can drive through the Facebook Ads API.

Though Nanigans CEO and co-founder Ric Calvillo has collegiate ties to the founders of online game kingpin Zynga, he hails from the enterprise software business – not media. As he tells it, Nanigans was built to “ride the wave” of social. His company’s business model is strictly SaaS. Think demand-side platform integrating the Facebook Ads API.

AdExchanger: Regarding the company’s background, did you create Nanigans solely around the opportunity afforded by the Facebook Ads API?

RIC CALVILLO: No. When we founded Nanigans, the name was ‘short’ for Shenanigans, a social game publisher. We built an app that was a directory of other apps and essentially a game discovery platform for Facebook. Then, we morphed from a publisher into this B-to-B model where we optimize Facebook ad spend through our SaaS platform for mid- to large app developers.

The main reason we ended up in today’s business model is that we tried to market our own app and found that it was difficult to, first of all, track and measure activity from an analytics perspective – meaning, attributing value and the attribution problem. A predictive model seemed difficult along with all the automation needed to bid, budget, do creative tasks, and everything else.

The Facebook ad platform seemed sufficiently unique relative to other display and search platforms such that we though there was a fair amount of secret sauce to be developed and needed in-market.

We had studios that we had already been talking to that were interested in using the service right away. We started out as a CPA service and then it switched quickly to a SaaS platform, so now we don’t resell any spend, it’s just a transparent SaaS technology – a buy-side platform.

So, in a nutshell, what problem is it that Nanigans solves?

We’re solving the problem of making paid acquisition for both new user acquisition and re-engagement efficient with minimal investment on the part of the mid- to large advertiser.

And, right now we’re running campaigns in Facebook and mobile. Facebook is our sole source of inventory today.

Who do you see in your competitive set today?

We play in two different markets primarily. The first is social and mobile games – so gaming. The second is e-commerce, which includes flash sales and deal sites.

In the social gaming world, I think our competition is Buddy Media. Buddy Media has a product called SAM that they acquired from Brighter Option. Then there’s a company called TBG Digital – an agency in London. Those are the two primary competitors for the SaaS platform.

Given the paid, owned, and earned worlds colliding in social, are you seeing an opportunity beyond the paid world for Nanigans? How do you interact with that ‘triangle’?

It seems to me that the line between paid and earned is blurring.

In the Facebook world, you can essentially override the edgerank algorithm – which determines whether your users’ posts or activity is seen by their friends – by paying for sponsored stories and sponsored posts. Therefore, having paid [media] is integral to earned and owned. In the Facebook world, I’d say the page or the app is owned, and then earned are those user activities that their friends will see.

In terms of paid ad products, first, we measure from an analytics perspective across paid, owned, and earned. We don’t actually optimize any of the earned media except to boost it with ‘paid.’ But in both cases, we can track downstream from the impression to the click and the arrival to the registration page or installation and return different measures of engagement: retention, purchases, invites of other friends.

We also track if a user acquired through paid channels goes and invites their friends through an application. Sites that advertise on the platform can instrument their sites or apps to track those things and then attribute value to those users. So we have the ability, for instance, to set up what we call a value plan in our system, and attribute value to a particular audience, segment or even ad creative.

For instance, when we launch games globally in 200 countries and in 20 languages, we often see that, for whatever reason, the French are the most viral – so, if you’re a buyer, you’re willing to pay a little bit more for French installs because they invite their friends more often.

I was going to ask about a use case, but it would seem you’ve just given it?

We have a whole bunch of use cases for those app developers wanting to improve ROI or ROAS with different attribution periods. People have different models. But the use case is essentially that we can automatically bid and budget and shape the traffic for optimizing the ROAS.

The app developer can bid relative to lifetime network value and not just the performance of the user for the first application. If it’s a larger developer, they may have a portfolio of apps that they’re going to cross-market to these users, so we need to take into account all of the downstream value of those users.

It’s interesting – on AdExchanger, it’s about RTB all the time. One of the things that I always ask is, “What do you mean by real-time?” With RTB, in that you can listen to a bid stream in real-time, you’re logging every bid request. And then you may be able to react and bid in real-time, and say, “Oh, here’s a demographic, a URL, a user with a cookie that we want. We already have a rule set up in the system to buy that person, so, yes, we can react to real time and bid on that user in real time.” But in our minds, the better question about real-time is if we see conversions and revenue start coming in for different audiences, how quickly can you update that bidding table? What if a certain demographic all of sudden stops converting? From our experience, that could be 90 minutes to a full day to update the value prediction. So we update every five minutes. We think that’s a differentiator.

Can you talk a little bit about the size of the market that you’re going after and then its target customers?

We’re going after the Facebook ad spend as expensed by performance advertisers. We’re not exactly sure what that percentage is, but the overall Facebook spend is forecasted to be $5 billion this year.

We don’t really view Ads API Partners as competitors. The competitor is the user who uses Facebook tools without a platform like ours. There is also a long tail component, the small spender, where the platform may not make sense.

Within our two verticals, like I said, the gaming vertical and the e-commerce vertical, we want to do whatever we need to do make paid advertising efficient.

How many people is Nanigans today and can you talk about your recent funding?

Sure, we’ve taken $3.6 million. We’ve been profitable for almost a year and a half. We think we’re the largest platform for Facebook advertising in terms of spend through the platform, but we have no way of knowing for sure.

We’re 55 people in the company with offices in Boston, New York and San Francisco and process 1.2 billion impressions per day. We track over 2 million downstream events per day including close to a million purchase events, and we have hundreds of millions of users that we track.

Looking out 12 to 18 months from now and some of the milestones you’d like your company to have achieved by then, what comes to mind?

This is all relevant to the Facebook API, right?

In mobile, it’s not necessarily going to be all Facebook. We don’t know yet. It’s whatever our customers need. It depends how quickly Facebook can grow their inventory and mobile.

We have three PhDs here on staff plus a Master’s, so the data scientist team is six people now. Over 10% of the people in the company have PhDs, so we’d like to continue our lead in data sciences and big data and our ability to predict performance.

We also want to make the product not only smarter but easier to use over time. Our vision is a buy-side, web-based platform that marketers can use to upload creative, tell the system what kind of campaign it is, put in a budget and then tell the system “go.” Then it emails you how things are going, and it’s fully automated – that’s the vision. And then we take a pretty low fee in that. We seem to take a lower fee than the DSPs in the display world, so maybe we can cut out some of the distribution layers between the publisher and the client.

Do you think the Facebook exchange is going to impact your world at all?

Yes, that’s the impression-level target I spoke of. It’s not the only way to do user-level targeting on Facebook, but we do see it as complementary, and we will definitely have something there. I don’t have anything to announce yet, but we will have something soon.