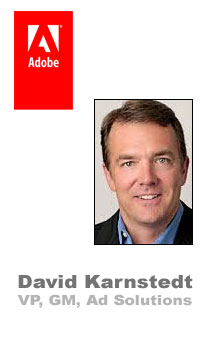 After two weeks of intense M&A in social CRM (see AdExchanger stories on Oracle/Vitrue and Salesforce/Buddy), it's helpful to keep in mind that Adobe is still arguably the only enterprise software company to bring social CRM, analytics, and search-plus-display optimization under one roof.

Efficient Frontier - acquired six months ago - is a key piece of that stack, providing the optimization and social brand management components, the latter through Context Optional.  In this Q&A from last week, former Efficient Frontier CEO, now VP and GM of Advertising Solutions within Adobe's Digital Marketing business, David Karnstedt discusses Adobe's onboarding process, the future of the enterprise "social stack," and escalating competition with Google.

AdExchanger: How has the Efficient Frontier integration with Adobe gone?

DK: The team is well integrated right now, which is good. We've got one more bit where we all move into Adobe facilities, and that takes place in the next couple of weeks, and then we're pretty much all integrated.

Adobe is certainly not new to buying companies, as you can imagine. They've got a good process for bringing people onboard. I've been in this space for a long time, and having been through a lot of M&A, both acquiring companies and getting acquired, I would give Adobe high marks on this front.

Is Efficient Frontier gaining access to Omniture clients yet?

There's a couple of things. If you think about the broader strategy of Adobe on the digital marketing side, they bought Omniture what I guess is now four years back, three years back. I think having the data and analytics is great. Then they bought Offermatica, which is now renamed Test&Target. You had data and you had creative optimization, you had personalized web experiences through Day software. The only part that was missing was ad optimization.

That's what Efficient Frontier brought to the party. The part that I'm not sure people have fully grasped is that you see Salesforce buying Buddy Media and you see Oracle buying Vitrue - well, essentially, not only did Adobe buy Efficient Frontier but we had acquired Context Optional, which is a leader in that brand engagement side on the social media front. They've really completed that digital marketing suite in a major way.

With Vitrue/Oracle and Salesforce/Buddy, it's not clear with either of those acquisitions that an advertising component was a significant part of what the acquiring companies wanted to get. Do you agree?

I think that's right. Buddy Media has acquired a company in that space [Brighter Option] to try and replicate what we have. I can't comment on whether it's integrated or not, but I'll put it to you this way. There are noticeable synergies between creating brand engagement and helping marketers behave like publishers, and advertising optimization. They fit well together.

Do you think the enterprise cloud companies that have gotten active in this space are looking to ads as well, or do they see that as a partnership opportunity?

I don't know. That's yet to be figured out. What is known is that things like programmatic buying and the scale required as advertising starts to evolve requires significant technology prowess. Companies that are good at that, like Adobe, recognize that they needed to jumpstart their efforts in digital marketing. That's why they've been so acquisitive and put so much capital behind that.

Speaking of stacks, today we have some news ‑‑ Google has unveiled plans to bring its ad products together under DoubleClick Marketing Manager.

They've been making a lot of progress on pulling their products together. They've been acquisitive too. When you think about Invite [Media], you think about DoubleClick, you think about all the things that they're putting together, the idea that they would want some uniformity to a platform makes sense to me. The big difference between a company like Google and a company like Adobe is that we're not a principal on the publisher side. We don't have to monetize our own inventory. Being a real third party and strictly on the technology side of things is a good position to be in. That will appeal to people -- the DoubleClick stack -- but the independence of a large company like Adobe is also appealing to a different class of marketers.

Just to push that one step further, one of the talking points with DoubleClick's integrated offering is that optimization will happen much faster. You guys are obviously a big player in optimization. Any reaction to that?

We started down that road two, almost three years ago with the idea of pivoting from search to programmatic buying of display, and then programmatic buying of social. We are believers in being able to optimize across all channels, and then attribute. Not just to the last click, but across that whole interaction spectrum. That's what we've been driving against. Now with Adobe we're already moving swiftly into mobile and we're working very closely with the Auditude guys to make a big stake and push in video. That's definitely where we're going.

You ran North American sales for Yahoo. What do you think Yahoo needs to do now, having observed their kerfuffle over the last month or so?

There are still an awful lot of very talented people at Yahoo. Having a clear strategy, direction, questions answered around leadership, all that stuff is step one. You've got to move swiftly - given some of the gymnastics over the last we'll call it six months - to really settle things down. To make sure you retain talent so that you can go do all the things you want to do out there. But I would tell you, as a former Yahoo and a fan of the property, there's still a ton of great assets over there, and a stronger Yahoo would be good for everybody.

Do you see them continuing to succeed with Right Media and other ad platforms? Or do you think they're better doubling‑down as a media brand and a "traditional" digital media seller?

I think having high‑quality inventory to monetize it is critical. That is the future for Yahoo. I don't know exactly where they are in the development of the platform of Right Media but programmatic buying is going to be essential for all media properties. Ideally, you would own that. If you're not going to own it, you've got to figure out the right way to partner for it.

Is there any interest from Adobe in buying an exchange that might be available on the cheap?

We're independent. That's going back to not being a principal in the inventory. We're operating on the roadmap that we're on right now -- this integrated digital marketing suite. That's where we're putting all of our energy.