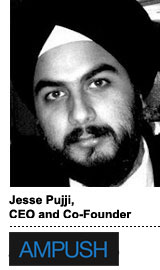 With experience in the Wall Street professional services world, Ampush CEO Jesse Pujji and his co-founders, Chris Amos and Nick Shah, have seen the big data of financial trading desks and their offshoots. And, that's one reason the trio decided to move into the online ad business and start Ampush in 2010.

Pujji told AdExchanger recently, "When we were getting ready to start a business, the online advertising space - given its number orientation and data orientations - became an obvious place for us to start to spend more time in."

Today, after focusing on the Google world of advertising for a while, Pujji's company is a Facebook Ad API partner and says its benefiting from the increasing amount of ad spend aimed at the social giant by marketers.

JESSE PUJJI: The way that we characterize it is Google has purchase intent. Then, there's this other thing that we call referred intent. Referred intent is where your friend or cousin might suggest a new pair of shoes or an insurance agent. There's a social element to it.

Facebook is a business of referred intent, which is incredibly powerful. Google, obviously, is also very powerful with purchase intent. That's how we draw the lines.

Which is more powerful - purchase intent or referred intent?

The answer, in my opinion, is referred intent. Purchase intent tends to get the credit because it's closer to the bottom of the purchase funnel. But, the reality is, it's not necessarily the thing that drives it forward.

We as an organization think, and I believe Facebook thinks, that [Facebook's ad platform] is five to 10 percent of where it's going to be ultimately. We truly believe that.

Facebook ad serving in a matter of a couple years will not only know who influences me but who influences me about what. That's when we start to think about how this becomes as powerful, if not more powerful than AdWords.

What do Ampush client campaign look like today typically?

Ultimately, everything in our business is performance oriented, but advertisers are typically looking for users in some way or another. So it's either, "I'm a social media client. I want to get new users to play my game and use it." They'll come to us and leverage the combination of our technology and our people to go out and run their campaign successfully.

On the other hand, for our big brand clients, they might say, "Hey, we need to get users engaged. We want to start driving a certain type of 'like' to the page that falls in this age demographic, and these kinds of likes and interests. And, we want to go out and run a large campaign to make it happen."

Today, the use case is built around some objective they're trying to accomplish with regards to their Facebook presence.

For the brand clients, that tends to be their priority at the moment. For good reason, you want to build out that graph and you want to start to understand whose on your page. Sometimes it's a sweepstakes, sometimes it's a broader branding type placement. You see brands within a spectrum guided by, "What likes do I want? How do I want to get them?"

Different pages are running together as you leverage what really is a display platform. 30 percent of display impressions on Facebook we want to leverage.

In terms of how I want Ampush to look in a year, we hope that a year from now, brands are thinking actively about what we call "verb strategy."

For example, let's take a simple [ecommerce] company which sends an email out to its customers. Some of them click on that email. That's the first "verb," and it's a powerful verb. They clicked on the email, came to the retailer's site and looked at the deal. There was some intent in the way the customer did that. That's the beginning of the funnel.

The second part of it is, "OK, how many of these products has the customer bought?" Then, maybe there's somebody else who shared it or did something else. It will be a world where somebody wakes up and goes, "What are all the verbs I need to be leveraging? And where should I leverage them?"

How do you define "action verb"?

The action verb ecosystem is a thing on Facebook. They started it with the three verbs of "watched," "read," and "listened." It's essentially a timeline app that is seamlessly shared on the Facebook platform. The best example is Spotify where you install Spotify once, you allow permissions, and every time you play a song, it's going to show up in three places organically – the ticker, newsfeed, and on your timeline.

What we're focused on is building out ad targeting for what are called Open Graph sponsored stories and other ad types that you can run to people based on the verbs and the nouns that they leverage.

Can you talk a little bit about Ampush headcount today and funding, and where you expect that to go?

We are close to about 40 people full-time, and about half of that is engineering and products. 25 percent of our team is client-facing with sales and what we call client strategists. The other 25 percent are media analysts - which brings up some of the unique things around recruiting and hiring.

We hire a lot of folks right out of school or out of the investment banking or consulting worlds, and that has been a huge edge for us in terms of how we present to clients.

I'd say about 70 percent of our folks have never worked in online advertising prior to joining Ampush.

In terms of funding, we are a completely bootstrapped business right now. The three founders funded the business originally. Originally, we were doing performance marketing. We didn't really have a focus area on social. And then about nine months into doing that, and really learning it, we started leveraging social and Facebook.

In terms of the future and taking funding, as the Open Graph starts to play out – and, let's say over the next six to 12 months - we'll revisit funding and whether we need to be moving faster because this Open Graph thing is moving faster.

Is the Facebook Exchange relevant to Ampush today, tomorrow...?

Yes, we're integrated through a partner onto the Facebook Exchange. We'll be offering that to our clients imminently. We see it as another critical offering. If you're doing Facebook ads for clients, you want to be able to offer them everything.

I think how it becomes even more interesting is when it gets integrated into the social contacts, social actions, and then over to Open Graph. We want to build ourselves around the Graph. That's our focus.