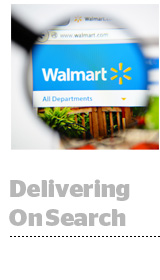 Walmart claims its programmatic advertising platform and ads API are ready for primetime.

It also launched an API to make that inventory available through Teikametrics, Flywheel Digital, Kenshoo and Pacvue, who were all API test partners.

Previously, advertisers and sellers were only able to purchase search ads and sponsored product placements on Walmart as part of a managed service buy.

Lex Josephs, VP of sales and media partnerships for WMG, said in a blog post that the partnerships let Walmart “meet the needs of advertisers.”

The tools were in beta since late last year, when it was first reported by Business Insider that Walmart was cooking up solutions to compete with Amazon.

If Walmart really wants to compete with Amazon, however, it needs to avail its unique retail and audience-level data – which for the moment isn’t available for ad targeting. Sources tell AdExchanger that Walmart Media Group’s new product primarily lets advertisers bid for keywords to position their ads at the top of a Walmart search results page.

But Walmart’s retail data, and the ability to attribute online search activity to in-store sales, would be a huge advantage for Walmart over Amazon. Ninety-percent of Americans shop at a Walmart every year and nearly 160 million people visit its stores and sites on a weekly basis.

"Walmart's most pressing advantage in ecommerce advertising is its offline experience and scale," said Nich Weinheimer, GM of ecommerce at Kenshoo. "Other ecommerce players, like Amazon, have been working hard to figure out how to measure the impact of their advertising on offline sales – for Walmart Media Group, the omnichannel customer continuity is already there."

Even in terms of reporting, Walmart is a closed-loop ecosystem and advertisers only get minimal info, such as visibility into performance by device type and insight into the frequency of searches. Walmart also provides some intel to map site search to in-store sales, although it’s early days on that front.

But advertisers are still chomping at the bit to spend with Walmart, partially to diversify spend away from Amazon.

“There’s massive interest in this platform being successful,” said John Shea, chief growth officer at Teikametrics. “The brands we work with want to activate more dollars on walmart.com than they’re currently able to spend, and they’re really excited about companies being able to plug in to enable that opportunity for them.”

Teikametrics already has “dozens” of clients actively buying sponsored product ads via the API, and, when they do, they’re able to generate an average of 30% more revenue per click.

It’s also noteworthy that the majority (around 85%) of orders that Teikametrics drives through Walmart sponsored ads come from non-branded search queries. In other words, searches from people looking for categories rather than specific brands, which means advertisers can use walmart.com to help drive visibility and awareness through product discovery.

“They are working to catch up to the more mature advertising platforms, like Amazon, Google and Facebook,” Shea said, “but Walmart has a sharp understanding of what brands want, they’re listening to brands and they have an opportunity to build something meaningful here.”

Over the past year, Walmart has been getting serious about bringing more of its media efforts and buy-side operation in house. Walmart ended its long-term relationship with retail agency Triad in February 2019 and acquired Polymorph Labs, which has a cloud-based ad serving platform, in April.