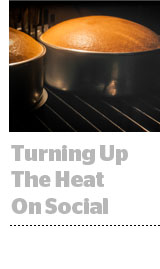 Taste of Home amassed almost 6 million followers on its Facebook pages, where readers actively commented and shared posts – without ever hiring anyone to run audience development.

Trusted Media Brands has hired more than 60 on the digital side this year as the print-focused publisher plays catch-up on digital across its properties, which include Reader’s Digest and Family Handyman.

“The best sites out there in our competitive set have 6 million to 7 million followers, and we had amassed almost as many followers without being staffed appropriately,” Hodes said.

Taste of Home also proved to be the exception to a cardinal rule practiced by social media editors: Never ask a question, because people might not answer.

“Everyone learned that it’s better to pick a side or take a stand than ask a question,” Hodes said. “Here, people actually answer, and we constantly ask the audience questions, like what cakes they are baking, or what tools they use around the kitchen. Hundreds will respond.”

But Trusted Media Brands didn’t realize how much its audiences for Taste of Home and Family Handyman differed between print and social media, which was unknowingly preventing it from connecting authentically with its audience.

“We are learning that when we see our audience as separate groups, we break down stereotypes about our audience,” Hodes said.

For example, Taste of Home’s Facebook audience is on average 30 years younger than its print audience, Hodes said. “We should cater to that [younger] audience and speak to them in a different way.”

Family Handyman, a DIY home repair publication, attracts an overwhelmingly male audience in print. “People thought our digital audience would also mostly be male,” Hodes said. But on Facebook, the audience is evenly split between male and female readers. On Pinterest, the audience is completely female-dominated.

“We needed to stop talking to our audience as if they were male, because they are female on a lot of these platforms,” Hodes said.

With better insight into who consumes their content where, Trusted Media Brands is switching up the content and tone to better speak to the different audiences on each platform.

Since Hodes joined, Family Handyman’s Facebook video views have increased 335%. Referrals from Pinterest to Taste of Home have climbed 63%.

“The audience on Pinterest is out there waiting for our content, but because resources were tight the platform didn’t get the love, attention and care it could have, so we have ramped that up,” Hodes explained.

Hodes also brought on new tech for the team to use: social publishing tool Social Flow and analytics platform Parse.ly, which help teams post content and understand how it performs.

To measure the overall success of its efforts to build social audiences, Trusted Media Brands switched up one of its key metrics from page views to site visitors.

“The game used to be about page views and massive slideshows,” Hodes said. “A big KPI for us is increasing our visitors to the site, and having them contribute in different ways, like subscribing to a newsletter.”

A more robust social media presence will also increase digital monetization. Unlike some publishers that try to build audiences first and then monetize them, Trusted Media Brands is doing both, in part because it knows it’s late to the game.

Tools like Facebook Instant Articles and “branded handshakes” already exist to help the publisher earn advertising revenue from its audience. And it’s finding brands are drawn to its organically built readership, Hodes said.

“Advertisers are taking note of the fact that our audience is more engaged than others.”