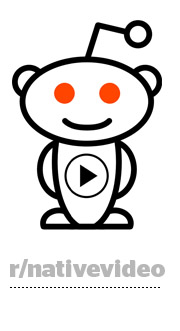 The ad unit is being made available to managed partners on Tuesday, and all advertisers will get a crack through self-serve within the next few months – but programmatic is still a long way off.

Although programmatic is on Reddit’s road map, “we’re still in the exploratory stages for how to RTB-enable our native ads,” said Zubair Jandali, VP of brand partnerships at Reddit, which has 330 million MAUs and recently edged out Facebook to become the third most trafficked site on the internet.

But if programmatic comes to Reddit – and don’t expect it this year, Jandali said – video will definitely be on offer.

Programmatic aside, Reddit’s video ads will be sold on a cost-per-view basis and appear, just like organic video content does, as autoplay in-feed with the sound off. The ads will mimic the look and feel of Reddit’s feed and only run within the Reddit mobile apps and on Reddit’s redesigned site. Reddit started rolling out its redesign in April, although visitors can still toggle back to the classic site experience if that’s what they prefer.

Users can unmute the videos by clicking on a megaphone icon within the player and engage with the content in the same way they can any other post on the platform, including by leaving comments, upvoting and downvoting.

It might sound risky for advertisers to open themselves to the judgment of the masses, but there’s nothing to fear in letting Redditors have their say, if the content isn’t compelling. Two-way interaction is the goal, Jandali said.

In working with brands to identify the right audiences to target, “we often encourage them to simply start a conversation … and then basically let go and allow it to flourish and proliferate,” he said.

For example, Nintendo, which beta tested the native video ads, posted a promotional video in May for the new edition of its video game, “Hyrule Warriors,” which triggered a lively conversation among Redditors about their favorite game characters.

Engagement has been trending up since Reddit launched its own in-house video player in August, giving users the ability to upload video and GIFs directly to Reddit, rather than having to use a third party. Native video views have grown around 23% each month since January, doubling overall since the beginning of the year.

Much of that isor user-generated video, of course – the stuff people share and engage with naturally, like in the r/oddlysatisfying community, where native video makes up 20% of all views. But people are engaging with video advertising, too, Jandali said. Video ads on Reddit get between three and five times the engagement as static ads.

“That’s not shocking for us,” Jandali said. “Reddit is a destination for people who want to consume video, [and] they presume that it’s interesting, informative and offers something that will stoke a conversation, which is why everyone is on the site to begin with.”

Reddit has been revving its advertising business since 2015 with the launch of a self-serve ad platform, interest-based targeting, autoplay ads and, most recently, in-app native ads for iOS and Android in March. More than 90% of Reddit’s advertiser base uses native mobile ad units, Jandali said.

The company does not plan now to release a pre-roll or mid-roll ad product.