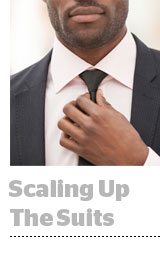 Advertisers want everything at scale: a niche audience, a brand-safe environment, and beautiful, engaging ads.

With the partnership, advertisers can buy in a single deal across Quartz and business-minded publications at Vox Media and NBCUniversal: Recode, The Verge, Vox and CNBC. The partnership will give advertisers access to 86 million unique visitors a month, 14 million of which are considered business decision-makers by comScore.

And because Concert focuses on bespoke creative, it can distribute custom creative and sponsored content campaigns across the publishers in its network.

While ad networks did the same, Concert is different because advertisers have transparency into where their ads appear and know they’ll be in a brand-safe context.

Plus, it’s publisher-controlled, eliminating the middle man. Both Quartz and Concert’s publishers sell into each other’s inventory – a right that was table stakes for Quartz, according to Robins.

“Social can deliver scale, but the level of engagement is quite thin,” said Ryan Pauley, GM of Concert and VP of revenue operations.

When Vox Media distributes sponsored content across Concert and Facebook for its advertisers, it sees five times the engagement when people see the content on Concert, Pauley said, because “it’s reaching people places where they are already consuming content.”

Both Quartz and Concert said they’re seeing strong interest from advertisers in the product, though they had no deals to announce.

In addition to Quartz, Concert plans to add more publishers to its portfolio soon that will offer access to other audiences in high-quality environments. Although Conde Nast joined and then left Concert in under a year, Concert works with publishers such as Penske Media, Entrepreneur and Brit+Co in addition to Vox Media and NBCUniversal properties.

“The ability to offer rich ad experiences that deliver engagement at scale – without sacrificing the brand safety component – is the sweet spot marketers are responding to,” Pauley said. “It’s why the business is growing and why we add partners like Quartz.”