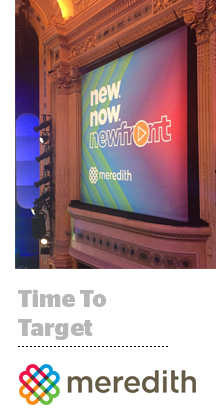 Data was center stage Thursday at Meredith’s first NewFront since the acquisition of Time Inc. closed at the end of January.

“We’re a data-driven organization,” its chief marketing and data officer, Alysia Borsa, told AdExchanger, referring to “the new Meredith,” where data informs everything from product to advertising to editorial.

The women-focused media company, which generates around 9 billion video views annually, is in the process of integrating its intent data assets with the data and tech it’s bringing on board through Time Inc., including people-based ad platform Viant.

Through partnerships with television manufacturers, Meredith gathers insights on what people are watching across 13 million smart TVs in the US. Viant’s platform has access to registration, device and subscriber data on more than 250 million people.

Meredith tracks what people are watching, gathers insights into TV viewing behavior and fingerprints the creative so advertisers can see who’s been exposed to their campaigns. From there, advertisers are able to reach people who might be underexposed through television, or buyers can up the frequency for TV-exposed audiences on digital channels.

“We can also track and tie that consumption to in-store sales,” Meredith’s head of video, Andrew Snyder, told AdExchanger.

According to the Meredith, 50% of consumers who engage with advertising through one of its titles online end up visiting a store within 24 hours.

Through a new partnership with Nielsen Catalina Solutions, Meredith said it will guarantee ROI on any video buy. The company already provides this guarantee for print and digital.

“This allows us to target them in more of a real-time way, when they’re more likely to be in market,” Borsa said. “Every time a consumer watches a video or clicks to buy or creates a shopping list or raises their hand, we’re learning more about consumers’ intent and that creates marketing opportunities.”

Advertisers demand brand-safe environments, said Meredith CRO Michael Brownstein. Brands are down to invest, even in live – Meredith inked a live streaming partnership with Twitter for an ad-supported show through PeopleTV – but they need to know the content is safe.

The brand safety ethos was top-of-mind for Meredith as it developed its new slate of video programming centered on how-to, entertainment, celebrity, beauty and food.

“There’s been an uptick in interest in live in particular, as consumer behavior shifts,” Snyder said. “Advertisers know that live is no longer the exclusive purview of TV networks, and if they select the right partner, they can get in front of the right people in real time.”

Meredith also rolled out a new vertical ad product called Stories that advertisers can natively embed the format within Meredith content and extend to Facebook, Instagram and Snap within a single ad buy.