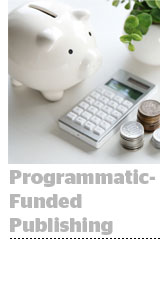 Granite Media, which is launching its first site, Work and Money, this week, wants to prove that a publication can run profitably with 100% programmatic ads and still turn out quality content.

“There are very few digital only, programmatic-only companies that are actually profitable,” said Granite Media CEO Danny Khatib. “That’s the problem we are interested in solving.”

The Granite team has done it before. Khatib is part of a three-person founding team that sold Livingly Media to Axel Springer-owned Aufeminin for $30 million to $40 million in 2015.

Two years after the acquisition, the trio decided to move on to a new challenge. Khatib serves as CEO, Tony Mamone as COO and Cleve Pasarell as CTO. The company raised $2.1 million in seed funding at a valuation of $10 million to get the business off the ground.

The team is starting with Work and Money, a personal finance publication, and plans to expand to travel, sports and politics in the next year.

In order to make programmatic advertising profitable, the publisher plans to rely on meticulous analysis of log-level data, which is about as deep as a publisher can go in the programmatic world.

Granite Media believes that better data in two key areas will make it able to produce a profit in no time.

First, it needs real-time data. If publishers can look back only to the previous day, for example, they lack the ability to make adjustments in real time. And accessing real-time data is particularly important for publishers who buy traffic, since they need to adjust their bids or spends quickly in order to capitalize on a hot story or avoid spending on a dud.

“Most publishers don’t have real-time revenue because they use DFP [Google’s DoubleClick for Publishers] as the revenue report of record, and it’s not a good reporting service,” Khatib said.

Some technical mistakes happen more frequently with header bidding. For example, a publisher might see $40,000 in revenue being recorded and applaud a buyer’s deep pockets. But in reality, the buyer thinks they only spent $4,000 because the impression pixel didn’t fire and the buyer kept bidding.

“This is an example of a programmatic problem that didn’t exist before,” Khatib said.

Granite’s tech works around these real-time revenue shortcomings. It created a prediction algorithm that can get within 1% of what the publisher is ultimately paid by Google, Khatib said.

Granite’s second advantage is that it can slice and dice its data in more precise ways, such as by an individual story or marketing campaign, in order to evaluate effectiveness.

Most publishers know that 75% of stories fail to make a profit and pay for the 25% that do hit. If Granite could adjust that spread just a bit, it could dramatically raise its revenue.

Work and Money is launching with 30 stories. In the first month, Granite will focus on analyzing which stories work.

Each story is in slideshow form, a tactic used to create page views. So Granite can look at data to see which users page through 40 slides to see a story, and which ones leave after a few page views.

User growth is a secondary concern.

“We are going to be more focused on acquiring data than acquiring users,” Khatib said. “Instead of trying to get to 10 million users in two months, we are going to prove we know how to predict and assign stories that are profitable.”

Granite Media’s freelance writers will see the data and each story will be evaluated based on how much revenue it brings in, a tactic that Granite’s team will be trying for the first time. Khatib said freelance writers generally respond better to knowing the economics of an individual article.

Work and Money will launch with connections to ad exchanges that normally require much larger monthly page view minimums. Because Livingly averaged 1 billion ad impressions a month, exchanges like Google AdX, Rubicon, OpenX, AppNexus, TripleLift, Sharethrough and Sovrn were willing to integrate with the platform at launch.

After testing which articles work, Granite Media plans to quickly expand to other verticals. And following its move into travel, sports and politics, the company plans to create content in a total of 13 verticals in three to five years

If Granite can prove it can use data to analyze what stories will turn a profit, and do so with real-time analytics, the company projects huge growth.

“I would be shocked and disappointed if we weren’t at 100 million ads a month in 12 months,” Khatib said.