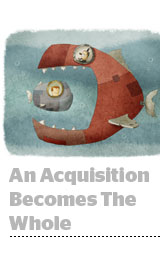 CafeMedia is selling its entire publishing portfolio to RockYou, choosing to place its bets on AdThrive, the ad management firm it acquired two years ago.

The AdThrive business is profitable but the sites being sold by CafeMedia – CafeMom, MamasLatinas, Revelist and Baby Name Wizard – were “break-even,” according to CafeMedia CEO Michael Sanchez.

“It’s hard to be a digital owned-and-operated publisher right now,” Sanchez said. “All credit to RockYou and others who believe in the opportunity.”

Advertisers that set up private marketplaces across the 2,000 blogs in CafeMedia’s network can collectively reach 102 million monthly unique visitors, according to comScore.

“To succeed in programmatic, you need to navigate the complexity of monetization, you need quality [content] and you need scale,” Sanchez said.

With AdThrive, CafeMedia did all three. “That’s why we’ve been so successful with AdThrive,” he said.

The AdThrive business grew 100% last year. Since the 2016 acquisition, 800 bloggers have joined AdThrive to monetize their sites and the business is profitable.

The sale of CafeMedia’s content business follows an ownership change. Private equity firm ZMC bought a majority stake in CafeMedia in late May for a reported $250 million, a number CafeMedia declined to confirm. ZMC invested with the expectation that CafeMedia would focus on the AdThrive business.

DFJ and Highland Capital, which had invested in CafeMedia in 1999, exited.

“It took a while, but everyone made money,” Sanchez said of the deal.

CafeMedia laid off 40% of its editorial staff in May prior to the acquisition. It also shut down the CafeMom forums in mid-May.

Forty employees will join RockYou, which snapped up LittleThings in April after the publisher went bankrupt. It also owns a number of games on mobile apps and Facebook.

Eighty employees will remain at CafeMedia to focus on the AdThrive business.

Before CafeMedia acquired it, AdThrive monetized its publishers’ sites completely with the open marketplace.

When CafeMedia took over, it started setting up private marketplaces. Brands can buy in creative ways, even doing AI-powered contextual targeting, all of which boosts CPMs. The engineering team grew from one to more than a dozen engineers.

CafeMedia is also looking beyond private marketplaces to programmatic guaranteed to continue to deliver high CPMs to its publishers.

To grow beyond the 2,000 food, parenting and home sites with which it currently works, AdThrive will expand into other content categories, Sanchez said.

Despite selling off all the original CafeMedia assets, the company will keep the CafeMedia name rather than changing it to AdThrive, Sanchez said, at least for the time being.