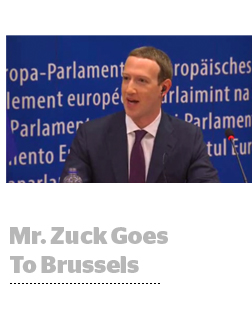 Anyone hoping for an intense grilling of Facebook CEO Mark Zuckerberg during his testimony Tuesday before European politicians in Brussels can keep on waiting.

Zuckerberg trotted out familiar talking points and was sheltered from the intensity and awkward eye contact of real interrogation by a strange format, in which members of the EU Parliament asked questions for nearly an hour and Zuckerberg spent about 20 minutes cherry-picking which he wanted to answer.

The parliamentarians were clearly frustrated. One exclaimed before the meeting broke up that Facebook had clearly “asked for this format for a reason.” Zuckerberg promised to supply written answers within the next few days to all the questions he didn’t respond to.

Here’s a quick rundown on what Zuckerberg did – and didn’t say – on his trip to the de facto capital of the EU, where the General Data Protection Regulation (GDPR) is set to take effect on Friday.

Zuckerberg refused to address specific questions about shadow profiles, which are profiles that contain data on non-Facebook users. Although he admitted Facebook collects this type of data for security purposes, it’s unclear whether non-users can control tracking.

Facebook users soon will be able to use a new tool, still in the works, called Clear History, which allows users to see and remove the data Facebook receives about them from other sites and apps, but that doesn’t speak to non-users.

“Will you allow users to escape targeting advertising?” demanded one parliamentarian. The question was not directly answered.

Re: compensation for GDPR infractions

Under Article 82 of GDPR, if there’s an infringement, European data subjects have a right to material compensation. Zuckerberg was asked but didn’t say if he’d considered what sort of compensation Facebook would provide users in the case of another Cambridge Analytica scandal.

Facebook has almost 400 million users in Europe. A breach would be exceedingly pricy.

Re: separation of services

Zuckerberg didn’t talk about whether an antitrust breakup of Facebook would be palatable.

“I think it’s time to discuss breaking up Facebook’s monopoly, because it is already too much power in one [set of] hands,” said Manfred Weber, who serves on the European Parliament’s Committee on Civil Liberties, Justice and Home Affairs.

“Can you convince me not to do so?” Weber asked.

No direct answer on that one.

What Zuckerberg did say

Facebook is doubling the headcount of its safety and security team to 20,000 by the end of 2018 and investing more in artificial intelligence (AI) to better identify and remove offensive content before it’s flagged by users.

Zuckerberg said Facebook is tackling the fake news problem by removing the economic incentive of spammers to create sensational content, by rooting out the spurious accounts that spread misinformation and by working with third-party fact-checkers to append questionable content with more contextual information.

Facebook’s game plan is to use a combination of AI tools to remove fake accounts, work more closely with local election officials around the world and continue the global rollout of ad transparency tools.

Re: the prospect of regulation

As Zuckerberg has asserted before, “the question isn’t whether or not there should be regulation,” but rather “what is the right regulation.”

In Zuckerberg’s view, the right regulatory framework is one that helps protect privacy while still being flexible enough to avoid stifling innovation.

According to Zuckerberg, Facebook isn’t a monopoly because, “from where I sit, it feels like there are new competitors that come up every day, competition that reaches hundreds of millions of people,” and Facebook “has to continue to evolve our services to compete.” (Snapchat may feel differently.)

He also pointed to the 18 million small businesses in Europe that use Facebook’s ad tools to compete with larger companies.

Zuckerberg claimed that Facebook expects “to be fully compliant” with GDPR by Friday.