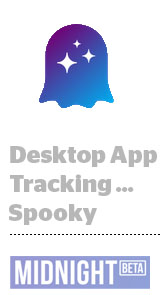 Ghostery aims to help users block the trackers it has been helping them monitor… for a price.

The company has developed a VPN and blocking tool that will shut down trackers embedded in desktop applications.

The tools, which entered an invite-only beta on Thursday, will be grouped together under the name Ghostery Midnight and sold as a subscription package for the sky-high price point of $14 a month.

How does Ghostery justify the steep cost? There are a lot of free VPNs on the market, but they’re generally free for a reason, said Melissa Bashur, the product manager at Ghostery in charge of Ghostery Midnight.

Bashur admitted Ghostery is a little “late to the game” with its VPN. NordVPN and ExpressVPN are just two examples of already-popular subscription VPNs, and both are cheaper than Midnight. Still, adding a VPN to Ghostery’s anti-tracker browser extension is a logical next move and a natural fit with the existing product suite.

On top of the VPN, Ghostery Midnight includes an ad/tracker blocker for desktop apps.

People are generally aware that they’re being tracked when they browse the internet. But desktop apps – think email clients (eg. Outlook), messaging apps (eg. Slack) and entertainment apps such (eg. Hulu) – are also collecting data which can be appended to profiles and used for a variety of purposes, including ad targeting.

“App developers implement their services to gain insights into their own products,” she said. “In return, Google and Facebook get a much wider reach of user data.”

If there are banner ads in an ad-supported desktop app, like Spotify, for example, Midnight will block them too, along with any data-collecting trackers.

Clearly, Ghostery wholly embraces its role as an ad blocker. But there was a time in the recent past when Ghostery was extremely uncomfortable with that designation. That was back when Ghostery was still a part of Evidon, whose primary business model was helping B2B clients, including ad tech companies, manage their digital governance.

“It was definitely a tightrope walk we had to walk trying to balance the business needs of enterprise clients and the privacy needs of consumer users,” said Jeremy Tillman, Ghostery’s president and head of product marketing, one of five Ghostery employees who made the move to Cliqz as part of the acquisition.

“After that, though, the gloves came off,” Tillman said. “Now our No. 1 priority can be our users, although our experience still gives us empathy for the business needs of companies.”

Empathy – but not sympathy. “There’s no reason that the status quo is the best way to do things,” Tillman said.

That’s a point of view shared by a growing number of web browsers, namely Safari with its Intelligent Tracking Prevention anti-tracking tech and Firefox with Enhanced Tracking Protection.

But isn’t the trend toward browsers blocking trackers by default bad for Ghostery’s business? Who needs to download an extension or buy an anti-tracking product if user agents are providing that capability automatically.

Tillman says that the moves being made by Safari and Firefox are helpful in that they raise awareness of “the breadth and depth of the tracker ecosystem.”