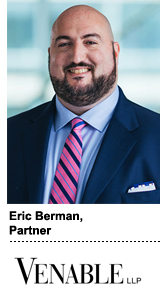 Every state in the United States, plus Washington, DC, has an attorney general tasked with regulating, investigating and enforcing against noncompliant marketing practices.

They’re known colloquially as “baby FTCs” – but don’t be fooled. They’ve got teeth.

“Think of state attorneys general as the top cops in their respective state; they’ve got active consumer protection agendas and they’ve got the resources to pursue them,” said Eric Berman, a partner and marketing attorney at law firm Venable LLP.

Near-constant headlines about data breaches and privacy lapses are defining the zeitgeist in DC. They’re also helping set the tone at AG offices across the country.

AdExchanger: How are the state attorneys general structured compared with the FTC?

ERIC BERMAN: Think of it as a bifurcated system. The FTC is a more than century-old quasi-independent government body that enforces federal law prohibiting deceptive conduct under Section 5 of the Federal Trade Commission Act.

Every state, including the District of Columbia, also has its attorney general office. But these don’t ladder up or answer to the FTC. The state AGs enforce each state’s own law. A lot of the time, state law mirrors the FTC Act, but sometimes state law is even broader and captures more conduct.

The states seem to be getting more active now. What’s driving that?

There’s an instinct to attribute a lot of it to the change of administration at the end of 2016 and that AGs are taking their cue to pick up the slack in what’s become a deregulatory environment. There’s some truth to that, the notion of a backlash against the Trump administration, but it doesn’t tell the whole story. Only slightly more than half of AGs at the state level are Democrats.

Another reason is because the state AG role is becoming increasingly more political, a nice steppingstone to Congress. It’s a notch in your belt to say, “I brought a case against a telemarketer that was bothering people in my state” or “I went after this company that stole people’s personal information.”

But it’s not just their appetite to go after this type of conduct, they have the resources. Over the last few years, we’ve seen state AG offices with bigger budgets. Plus, they coordinate with each other and are more open to sharing intelligence with each other.

What are state AGs prioritizing from a consumer protection perspective?

Telemarketing abuses and robocalls, privacy and data security, data breaches and debt collection are all top of mind, as are public safety issues, like the opioid crisis.

Which state AGs are particularly aggressive?

California, New York and Massachusetts are the top three, although Illinois is quite active and DC punches well above its weight, even though it’s a relatively small office.

What are some tips for advertisers to keep themselves on the right side of state enforcers?

You do not want to be the lowest-hanging fruit, and by that I mean that state AGs can’t whack every mole they see. They’re staffing up, but they don’t have unlimited resources, which means they have to decide which company to pursue over another. Many times, those decisions come down to who has the most egregious conduct, who is harming the most consumers, who is causing the most monetary loss.

My message to my clients and to anyone is this: If you have a marketing message, actually watch it, read it, listen to it. If you make a claim about a product or service, make sure you can back it up with real evidence at the time you made the claim.

Do the state AG offices have enough technical savvy to deal with increasingly complex data-related issues?

It would be a big mistake for advertisers to assume that government regulators won’t catch them because they don’t understand technology. These are smart people and underestimating them could be a fatal error. They also employ a lot of investigators.

What triggers a state AG to open a case?

It can start in any number of ways, the most common being consumer complaints. That’s true at both the state and federal level.

There’s a lot of information sharing going on. The FTC, for example, keeps a huge database of consumer complaints called the Consumer Sentinel, which all state AGs have access to, and roughly half of the states are now sharing their own complaints with the FTC. Sometimes, cases are referred from one law enforcer to another or a state is asked to collaborate with the FTC.

But also remember that regulators are consumers themselves. They listen to the radio, they see TV ads and get the same emails as anyone – and sometimes they take off their consumer hat, put on their law enforcement hat and start digging. They have tremendous investigative authority if they have reason to believe something illegal is going on.

How should advertisers respond to inquiries?

Maintaining credibility is paramount. You have to be very careful in terms of the representations you make to regulators about business conduct, including what is being modified or remedied. Anyone can look up the law. A lot of this is about making sure that regulators believe you when you say that certain conduct has stopped, that there’s been no injury or that your advertiser client is a good actor.

Frequent engagement is also a good idea. Stay in touch. Even if it seems like you’re getting radio silence from a regulator, you will hear from them again. Investigations don’t just go away.