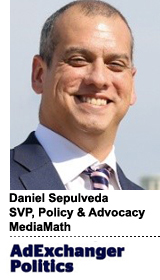 Today’s column is written by Daniel Sepulveda, senior vice president for policy and advocacy at MediaMath.

Lawmakers and industry leaders have not yet reached consensus on digital political advertising rules. As a result, no one is satisfied with the platforms’ varying self-governing policies.

Facebook, for example, won’t fact-check political ads or disclose campaign targeting parameters. Twitter won’t run any political ads. And Google will disable many targeting tools for political ads to control abuse, but now the platform is less useful for small campaigns and campaigns with first-party data.

Targeted political digital advertising can have real, positive value for voters and campaigns. Campaigns should be allowed to focus their message on the parts of their issues platforms that need more awareness or are relevant for particular groups. They should be able to engage supporters and potential supporters with calls to action.

Campaigns should also be able to construct custom lists of voters they think might be open to their messages. The challenge is to make those tools foster transparency and encourage healthy discourse and debate.

These are difficult issues, and while there may not be a perfect policy, there’s an alternative for the industry to consider: full transparency in political advertising as proposed in the Honest Ads Act. This should enable scrutiny of ads and ensure that competing ideas and campaigns can find the same voters.

The Honest Ads Act before Congress mandates transparency within advertising technology for political campaigns, but there is much debate on what this means. Its rules for transparency hinge on disclosure of all creatives, targeting parameters and media spend.

In addition to the law, there should also be minimum audience size requirements to ensure that a large enough group of voters see the ad to enable scrutiny. And no advertiser, political campaign or other entity should be able to distribute verifiably false or misleading advertising. Each platform should be able to make the call of when that line is crossed, but to draw no line at all is an abdication of responsibility.

The mandates should either be made law or an industry standard, enabled and managed by one of our trade associations with a centralized, publicly available transparency database.

It is a challenging subject due to the gray areas around what is true. At a minimum – and it appears there is universal agreement on this point – no platform that enables targeted digital advertising should turn a blind eye to content that suppresses voting. This would include advertising the wrong date of an election to confuse voters about when to vote.

Less universally agreed, no platform should allow the amplification and targeting of verifiably false information. For example, the claim that a candidate is soft on crime is not verifiably true or false – it is an opinion. Claiming that an opponent is a criminal is verifiable by checking public records. Platforms should police against those behaviors.

More common are the debatable assertions all campaigns make. For competing campaigns to meaningfully challenge opposing ideas and present their own views, they need to know the audience that the assertion targeted.

The industry should look to Congress to step in, pass the Honest Ads Act, which is currently stuck in committee, and provide additional guidance. This includes partnering with advertising trade associations to collectively establish norms that we can all adhere to.

Digital advertising is not a tool available only on Google and Facebook. Advertising spend will migrate to where it works. As a result we must work toward generally applicable rules and norms and continue iterating on them until we are sure our democracy is free from algorithmic manipulation.