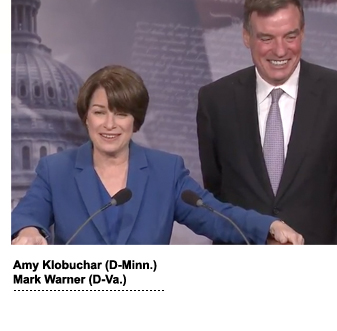 If lawmakers have anything to do with it, political ads on Facebook, Google, Twitter and other online platforms may soon be subject to the same disclosure requirements as traditional political advertising.

Senators introduced a bipartisan bill on Thursday to do just that, prompted by revelations of Russian meddling before and during the 2016 US presidential election. Sens. Amy Klobuchar (D-Minn.) and Mark Warner (D-Va.) are sponsoring the bill with support from John McCain (R-Ariz.).

The goal is to pass the bill by early next year, well before the next midterm election, although it’s unclear exactly when Congress would vote on it.

“Americans deserve to know who’s paying for the online ads and, honestly, even if the Russian interference had not occurred, we should still be updating our laws,” Klobuchar said during a press conference Thursday. “Our laws should be as sophisticated as those who are trying to manipulate us or to break the law.”

If passed, the Honest Ads Act will require online platforms with 50 million or more users per month – Facebook, Google and Twitter all sit comfortably beneath that umbrella – to maintain a public file so US citizens can easily see the content of the ads, including when they were published, who was targeted, the number of times they were seen, who paid and how much they paid.

The platforms will also have to generally “do a better job of policing their sites” and make what the law calls “reasonable efforts” to ensure that foreign nationals aren’t manipulating their platforms to influence elections, Klobuchar said.

Warner specifically called out dark posts as problematic. Dark posts are only visible in the news feeds of specific people within a targeted segment. The content doesn’t appear on a page, so it’s virtually impossible for anyone who isn’t being targeted to see it.

Ads that “disappear after they’ve targeted a very select demographic group … is not the kind of transparency that we need,” he said.

Facebook in particular has been making an effort to provide a bit more transparency in how political advertising is bought on its platform.

In addition to turning over a cache of roughly 3,000 Russia-linked ads to Congress, Facebook has said it plans to require advertisers to disclose which page paid for a post and enable anyone to see which ads a page is running. Dark posts, which were reportedly used heavily by the Trump campaign in 2016, are also on the chopping block.

Penalties for noncompliance would be similar to those in the Federal Election Campaign Act, which regulates the financing of political campaigns in the US, and would include fines and other liability for the individuals and online platforms involved.

Although Facebook, Twitter and Google didn’t seem to take the Russia issue all that seriously last year following the election, they’ve changed their tune.

Mark Zuckerberg originally poo-pooed the notion that misinformation distributed on Facebook could possibly have influenced the election, calling it a “pretty crazy idea.” He’s since said he regrets the statement.

Although none of the big online platforms have publicly supported the bill, doing so and working with the senators on it would be “in their own self-interest,” Warner said during the press conference. “The social media companies were frankly late to the game in acknowledging this problem, but I think they’re moving in the right direction.”

And as to whether Facebook and its cohorts are media platforms or technology platforms, that’s just semantics, Klobuchar said.

“I don’t really care what they’re called – what I care about is that they are selling ads, they have huge departments of people selling ads [and] they’re making money off it, just like TV, just like radio does,” she said. “Those same rules should apply.”

Facebook will testify before Congress on Nov. 1 about the extent to which it believes its platform was used by Russian operatives during the 2016 presidential election. Twitter and Google, both of which are dealing with their own Russia headaches, have also confirmed their attendance at the hearing.