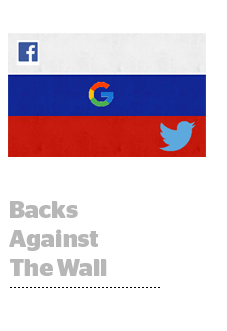 Google is the latest walled garden to be sucked down the Russian rabbit hole.

The Washington Post reported Monday that Google has uncovered evidence of ads linked to Russia that were used to spread propaganda via YouTube, Gmail, Google Search and its DoubleClick ad network.

Google’s revelations follow similar disclosures by Facebook and Twitter, which both saw ad buys on their platforms exploited to stoke political, racial, cultural and social divides.

Noteworthy is the fact that there doesn’t seem to be much overlap between the shadowy troll farms that bought ads through Google and the ones that took advantage of Facebook, which begs the question: How big is this problem, really?

Facebook, Twitter and Google have all been asked to testify before Congress at a Senate Intelligence Committee hearing on November 1 about the extent to which their platforms were leveraged by Russian operatives looking to sow dissent in the lead-up to the 2016 US presidential election.

Facebook and Twitter have both agreed to appear at the hearing. Google has not yet confirmed whether it will send anyone to testify.

As information about the breadth of Russian meddling in the US election is offered up – or leaks out – in drips and drabs, many questions still remain. Here is what we know – and don’t know – so far.

What we know: Google previously publicly denied finding any evidence of Kremlin-affiliated ads on any of its platforms. Even so, in order to cooperate with the ongoing congressional probe, Google did launch an internal investigation into whether its ad products were used by Kremlin-backed entities to influence the election.

Google reportedly cross-referenced Twitter firehose data with its own in order to find a connection between Russian Twitter accounts and accounts that used Google to buy ads.

How many ads were bought? No info at the moment.

How were the ads bought, and where did they run? Russian agents appear to have bought ads designed to spread disinformation across numerous Google products, including DoubleClick, YouTube, Gmail and Google Search.

What did the ads advocate? The exact content of the ads has not been revealed.

What is Google doing about it? Google is still in the process of separating the ads into those that originated with trolls and those that were purchased by legit Russian sources. Google is reportedly also sharing data with Facebook as they both continue to review Russian influence on their respective platforms.

What we know: Facebook revealed in September that a troll farm with ties to the Russian government called the Internet Research Agency had bought ads on the platform apparently designed to spread disinformation and influence the election results.

Facebook, already in the hot seat over accusations of distributing fake news and enabling racist ad targeting, initially resisted handing over the ads and the targeting criteria used to Congress, although the platform later acquiesced in the face of mounting pressure. Facebook is also cooperating with special counsel Robert Mueller’s investigation into the Trump campaign’s possible Kremlin connection.

How many ads were bought? Facebook found around 3,000 ads purchased between June 2015 and May 2017 connected to about 470 fake accounts and pages that violated its policies and were likely operated out of Russia.

Facebook is also looking into an additional 2,200 potentially political-related ads not affiliated with the Internet Research Agency that may have originated in Russia to the tune of $50,000. These ads did not violate any internal Facebook ad policy.

How were the ads bought, and where did they run? The ads, purchased through Facebook Ad Manager, likely reached as many as 10 million people in the news feed. Roughly 5% of the 3,000 ads (about $6,700 in spend) appeared on Instagram.

What did the ads advocate? Although Facebook said that “the vast majority” of the ads run by the Russian accounts didn’t specifically refer to the US presidential election, voting or a particular candidate, some of the ads did reportedly promote Bernie Sanders, Jill Stein and Donald Trump.

According to Facebook, most of the ads focused on “amplifying divisive social and political messages across the ideological spectrum,” including immigration, gun rights, race and issues related to the LGBTQ community.

At least one ad bought during the 2016 campaign referred to Black Lives Matter and was geotargeted to audiences in Baltimore and Ferguson, Missouri, both hotbeds of racial tension.

Roughly one-quarter of the 3,000 ads were geotargeted.

What is Facebook doing about it? In addition to cooperating with authorities, Facebook is introducing new transparency measures, including requiring advertisers to disclose which page paid for an ad and eliminating dark posts, which allow advertisers to target specific users with content without having to post it to their page. Anyone will be able to see which ads a page is running.

Facebook is also adding 1,000 human moderators to its global ads review teams over the next year.

These changes were triggered by the political situation, but they will also apply to any advertising on Facebook that aims to reach potentially sensitive interest categories. Ads targeted at “social issues or political interests,” will automatically be sent for human review.

What we know: Twitter found several hundred accounts with links to the dubious Kremlin-backed Internet Research Agency. Several of the accounts were connected to Russian international TV network RT (Russia Today), which is funded by the Russian government and essentially acts as its propaganda arm.

How many ads were bought? Twitter has said that three RT-linked accounts promoted 1,823 tweets that “definitely or potentially targeted the US market.” Twitter has declined to share the reach and impact of these accounts, including how many times misinformation associated with the accounts was shared.

What did the ads advocate? According to Twitter, the tweets “were directed at followers of mainstream media” and mostly promoted RT tweets about news stories.

What is Twitter doing about it? Twitter shut down 201 accounts related to the Internet Research Agency and is continuing an internal investigation into Russian influence on the platform.

Twitter has said that it “supports making political advertising more transparent,” and that it already has stricter policies in place for ad campaigns on Twitter than for organic content. It’s also investing in ways to better suss out bots and detect compromised accounts.