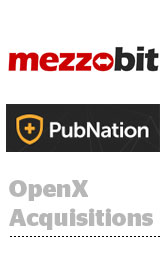 OpenX acquired two publisher tools, Mezzobit and PubNation, on Monday. By bringing these point solutions in-house, the SSP plans to strengthen its overall offering for publishers.

The tools don’t boost yield for publishers, which is how publishers typically grade SSPs, but rather help them track down slow or suspicious advertiser tags and monitor overall ad quality.

Mezzobit allows publishers to see how many tags are loading on a page. Publishers can monitor how those tags affect page performance and what kind of audience data these tags might be collecting.

Terms of the deal were not disclosed, but the sale involved a mix of cash and stock.

Pre-acquisition, both companies used software-as-a-service fee models, but OpenX is still working out how it will charge for these services. CEO Tim Cadogan said the company will likely use more than one pricing model, meaning customers could pay for the services separately or perhaps have those costs rolled up into the main OpenX offering.

The acquisitions allow OpenX to differentiate itself in a market where publishers often view SSPs as interchangeable yield generators.

“We think most publishers think about the entire value of who they are working with,” Cadogan said.

While rival SSPs prepare for a price war by lowering fees, OpenX thinks it can stay in the game by providing more value for its fee.

“We want to make sure that we aren’t going to an overly narrow focus on price,” Cadogan said. “If you buy something cheap that’s not good, there’s not value.”

OpenX said the acquisitions complement another recent move it made as part of its value-focused strategy: bringing transparent first-price auctions to buyers.

“We are thinking about what we can do better to provide more value to both sides of the house,” Cadogan said.

Another SSP acquisition this year, Rubicon’s purchase of nToggle, also falls into the value-to-buyers bucket, so OpenX isn’t alone in thinking about how to strengthen its offering through acquisition.

PubNation was first developed by a publisher, Curiosity Media, and OpenX will transition tech development to its team post-acquisition. Publishers will continue to use the automated tool, but OpenX will also use the tech to bolster its overall ad quality.

Bringing tools to monitor tag performance and ad quality in-house could compromise their neutrality, but Cadogan says publishers will value easy access to these tools over the hassle of implementing a point solution.

“Header bidding containers are also a revenue source,” Cadogan said. “If the product or service is valuable enough to the publisher, and it’s fully transparent, then you can choose to use it.”