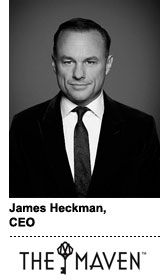 “We’ve tested this model several times over the past 20 years and it’s never not succeeded,” Heckman said.

Heckman’s history goes back to the dot-com boom and includes time as a founder of Rivals.com as well as stints at once-greats like MySpace. In 2011, he sold the ad network 5to1 to Yahoo for $28 million, after raising almost half that much in funding.

Most recently, he led Scout, a publisher that filed for bankruptcy shortly after Heckman left under a cloud of accusations from investors. Heckman did not address the bankruptcy, but maintains those projects created lasting value. “Rivals and Scout both succeeded,” he said.

Instead of going the VC-backed route to get Maven started, Heckman did a reverse recapitalization with a public shell company called Integrated Surgical Systems and renamed it Maven. The move allowed the startup to go public without working through the complex IPO process.

This workaround pays Heckman and his team generously even though Maven is pre-revenue.

The reverse recapitalization gave Maven access to $2.1 million in assets it used to launch the business. Of that total, $1.7 million went to administrative expenses last year, including toward the C-suite’s salaries.

Because Maven trades on an over-the-counter bulletin board for less than $5, the SEC defines it as a penny stock. But its small size opens it up to a wide range of investors, Heckman said.

Since launch, the stock has risen from 15 cents to $1.83, giving the stock a market cap just under $50 million and making Heckman’s 15% stake in the company worth millions.

“With venture capital, employees and founders miss out on the most important equity gain,” Heckman said. “We decided to bring it public before launching, therefore rewarding founders with equal equity.”

“Most entrepreneurs in their twenties don’t have public company experience,” he added. “We are all very comfortable operating within the structure and requirements of a public company. VCs would not allow an entrepreneur to do that. [The company structure] is highly unusual but incredibly powerful.”

Heckman has convinced others with ad tech experience to join him. Ross Levinsohn, a friend and fellow Yahoo vet, serves at the company’s director.

Jacobs at first was skeptical about the model, a tech-driven spin on the ad network. (“I did Glam for a while and have seen the traditional publisher ad network model rise and fall,” he said.) But he decided to join for a couple of reasons.

“We are asking people to move this whole business onto a different platform that involves content management, community management and publishing infrastructure,” Jacobs said. “These are huge time and cost sinks that prevent [small publishers] from growing the content side of the business.”

Jacobs recently had a “light bulb” moment when a small hip-hop publisher wanted to talk header bidding, not music.

“Programmatic has become a big-player world, with direct IDs and header integrations,” he said. “This guy can’t ever optimize the waterfall enough to change the trajectory of the business.”

The first eight publishers to move onto Maven’s platform include the Black Wealth Channel, TheChocolateLife, iREIT Investor and the Fathers’ Rights Movement. Maven said another “several dozen” are expected to sign on in coming months. Heckman wooed some publishers by holding a summit at his lakefront house on Bainbridge Island in Seattle.

Publishers also will receive stock that vests over a three-year period.

“Heckman was the one that really sold me, that they have the background to pull this off,” said Boyce Watkins, the founder of Financial Juneteenth, a six-year-old personal finance site for African Americans.

In fact, no ads run on any of the sites in Maven’s network. Nor does Maven promote any special features for mobile publishing or social distribution.

While Heckman claims that the sales-driven tech and monetization model has worked consistently for him for the past two decades – including for the bankrupted Scout – even competitors have been challenged succeeding on this model.

Medium tried providing monetization and a CMS to publishers in 2016, and its clients included The Awl, The Ringer (which just moved to Vox) and ThinkProgress. Less than a year later, Medium laid off a third of its staff and CEO Ev Williams declared ad-supported journalism didn’t work. “The broken system is ad-driven media on the internet,” he said at the time.

Maven is betting the opposite, that well-executed programmatic advertising will help publishers.

“Medium is not our model. It’s a single destination,” Heckman said.

If there is a difference between the platforms, it’s that Medium, with its intuitive, clean layout and $130 million in funding, likely spent far more designing the platform. By contrast, Maven uses tiles with snippets of original content and ones sourced from the web.

Heckman is optimistic about the challenges ahead: “Putting this company together is the same thing I’ve been doing since the ’90s.”

And he and his team get to draw a paycheck – and own millions in stock – while Maven sets out on its mission to transform the publishing industry.

Not bad for a publishing platform with zero revenue.

This story has been updated to reflect additional revenue figures for The Maven's research and development.