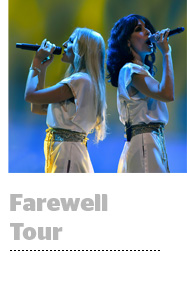 Bad news, disco fans: Advertisers will soon no longer be able to target people on Facebook based on their love of ABBA’s 1977 hit “Take a Chance on Me.”

That’s just one of several thousand infrequently used targeting options Facebook is getting rid of in an effort to declutter its ad system, the company said Tuesday.

Advertisers with existing campaigns using these options will have the next few months to update before their campaigns are rejected. For new campaigns, the removals will start immediately and wrap up in August.

Beyond ABBA, other older album and song titles are on the chopping block – bye, bye “Pompeii” by the British band Bastille, for example – as are long-in-the-tooth game titles, such as the 1998 PlayStation puzzle game “No One Can Stop Mr. Domino!”

Facebook is also eliminating overly specific location-based targets. Right now, for example, it’s possible to target people based on their interest in the San Francisco neighborhood of North Beach. But targeting by “San Francisco” would probably be just as, if not more, effective.

“It’s a bit of a sweet spot thing,” Mudd said. “We want to provide the right degree of input, but constraining an audience oftentimes means that performance will suffer.”

Most advertisers aren’t likely to notice the changes. Most don’t and probably haven’t ever used these targeting parameters. But periodically cleaning house is just “good hygiene,” Mudd said.

About five to 10 years ago, Facebook took an everything-but-the-kitchen sink approach to the options available through its ad platform. As the system has evolved and become more sophisticated, however, Facebook has started to take a more Marie Kondo approach to its offerings.

“If you only add and never take away, you get to a place where you’re bloated and difficult to use,” Mudd said.

Still, new targeting parameters are added to the platform all the time.

Facebook uses a mix of human review and automation to look at people’s behavior on the platform – trending topics, Page creation and other related signals – to determine which interest-based segments to generate for its ad system. If someone likes a post from a particular band, for example, Facebook might infer that the person is into that genre of music.

Over time, these interests can pile up like newspapers in a hoarder’s vestibule.

Facebook now regularly prunes its targeting terms based on how many advertisers use or don’t use them, and how much they’re spending against them.

In August of last year, Facebook removed more than 5,000 targeting options that could have been misused to discriminate against minority groups. Facebook was under fire at the time for illegally enabling advertisers to exclude certain users from seeing ads for jobs, homes or credit.

But while that move was about risk reduction and policy compliance, this culling is a bit different, Mudd said.

“It’s about simplicity and making sure that our platform is easy for people to use,” he said, noting that the removal is also unrelated to the regulatory “ad targeting headwinds” Facebook CFO Dave Wehner referred to in the company’s most recent earnings call.

Beyond its plan to chuck disused targeting options, Facebook also said Tuesday that it’s going to create more consistency in the look and feel of Feed ads and Page posts, and roll out tweaks that make it easier to use Business Manager over the next few months, including a redesigned navigation bar, more organized permissions management and the addition of feature shortcuts.