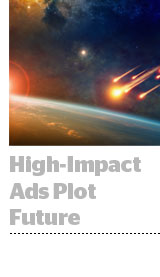 Overcoming the banality of a standard banner ad in favor of a custom unit requires a lot of work.

Buyers need to work with creative tech companies to build the units, and publishers need to adjust their ad setup to support the unusual formats.

When header bidding became the norm, it cut off these companies’ access to supply.

PadSquad, which designs and places high-impact ads, traditionally nabbed a spot in the publisher’s waterfall, but had a tougher time winning impressions once header bidding became the norm.

Meanwhile, its publisher partners like CafeMedia missed out on PadSquad’s custom ads that provided more revenue than banner ads. While PadSquad could have developed a header biding adapter, or created a JavaScript tag, the publishers it worked with didn’t want to add more code to their pages, which would be cumbersome and slow down their sites.

Instead, PadSquad asked during the second quarter of last year if Rubicon Project could create a private marketplace to route high-impact ads through the exchange’s header bidding integration with CafeMedia.

“We don’t want to be in the game of having tags or a wrapper on the page,” said PadSquad CEO Daniel Meehan. “We want to focus on an amazing experience with our clients facilitated through the best existing pipes.”

The new setup also lets PadSquad’s clients use their own DSP to buy the high-impact ads. In the past, PadSquad ran via a managed service model. Clients would submit insertion orders, PadSquad would spend four to six weeks building the creative, and then it would buy the inventory itself with a markup covering its work.

In the past 18 months, that managed service business model went from being its entire business to just 55%, and 45% of PadSquad’s clients buy via private marketplaces on sites including the ones represented by CafeMedia, Meehan said.

Buyers can purchase PadSquad’s high-impact units by pointing their DSP at a Rubicon Project deal token that contains all the publishers supporting the ad unit. Buyers can’t just place these ad units on the open marketplace, because publishers must do custom work to support the ads. Often, they must disable SafeFrames, a technology that restricts what an ad is allowed to do, to prevent fraud and malware.

Because of this inability to scale the ad across more users and sites, buyers would end up reallocating budgets to standard ad units, Meehan said.

But the private marketplace solution has made it so PadSquad’s ads now run across 2,000 sites, Meehan said.

There was one more wrinkle to sort out: Since buyers are using their DSP to buy directly with the publisher, PadSquad needed to find a way to get paid a percentage for each ad placed.

So it came up with a system where it would receive a portion of the advertiser’s spend with a publisher. CafeMedia adjusts the gross bid within its header biding wrapper, Prebid, to account for the portion of the gross bid that goes back to PadSquad, explained Paul Bannister, EVP of strategy for CafeMedia.

The transparent setup is a departure from PadSquad’s previous model.

“The market is demanding transparency,” Meehan said. “We are allowing Rubicon and the publisher to see the gross bid flowing through from the DSP and directly into the partner’s ad server. At the end of the month, we reconcile.”

To support the unusual payment structure and unique ads, Rubicon Project deployed its solutions engineering team to make the setup work, said its SVP of seller accounts Heather Carver. Advertising budgets began to flow quickly after it connected PadSquad to publishers, making the setup work worthwhile. “They already had pent-up demand just waiting to activate using their DSP,” she said.

The new setup ensures PadSquad will thrive in a header world. “Programmatic is a reality now, and it’s a large portion of our business. Having everything flow seamlessly through the header maximizes the opportunity,” Meehan said.