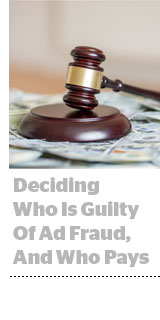 Google’s latest anti-fraud measure aims to stamp out ad fraud by clawing back money from the exchanges where its DSP purchased fraudulent inventory.

In Q4, DoubleClick Bid Manager will give advertisers the option to buy only from exchanges that will refund media spend for fraudulent inventory.

Over the past month, Google’s DSP has issued advertisers refunds for the technology fees it deems are associated with invalid inventory, as well as media refunds if the inventory was bought through Google AdX, The Wall Street Journal reported Friday.

But there’s a sticking point: Google will issue refunds based on its own, secret determination of fraud and not a third-party measurement. That approach is attracting criticism from agencies and exchanges.

“By not making this tracking available, they’re using their buy-side power to improve their sell-side position, whether that’s the intent or not,” noted a senior agency executive who declined to speak about Google on the record. Google should make its fraud monitoring software transparent and available to all, the executive advised.

On the exchange side, OpenX said it preferred not to let a DSP judge whether or not something counted as fraud.

“One key principle we must all agree on is the need for an independent third-party ‘referee’ in the market, serving neither the DSP nor the SSP, that is empowered to make the final determination on whether fraud has actually occurred,” said Ian Davidson, OpenX’s VP of platform demand.

Google said it would provide reporting to agencies and exchanges outlining where it found fraud in an attempt to allay those concerns. But it can’t get too detailed in those reports because it doesn’t want to see its fraud-finding tactics reverse engineered.

“We want to make sure we are as transparent as possible,” said Payam Shodjai, Google’s director of product management. “We think it’s important for the ecosystem to have more transparency and not keep all of this at our end.”

It hasn’t always been clear who should be on the hook for media costs associated with fraudulent inventory. In the direct world, advertisers signed terms with each publisher, but in an exchange-traded environment their ads often end up on sites with which they have no legal agreements.

“The legal and financial aspect [of refunds] becomes pretty complex when you have an advertiser, agency, DSP, exchanges/SSPs and publishers,” noted Tyler Pietz, principal at Two Rock Consulting. “Typically, these intermediaries have ‘sequential liability’ clauses which push the ultimate liability on down to the publisher.”

By only refunding tech fees for fraud purchased through its DSP, Google has determined that the exchange bears financial responsibility for fraud. The exchanges, in turn, must try to claw back money from the publisher where the fraud occurred.

“The exchanges are responsible for the quality of the traffic, which is why DBM is saying to clients that if you want money back for the media, go to the people transacting the media,” summed up Oscar Garza, global director of media activation for Essence (which counts Google as a client).

But even Google will have to renegotiate some of its contacts with exchanges in order to give advertisers the option to only buy from exchanges that will automatically issue refunds, Shodjai said. “We want to make sure that all the right provisions are in there so when there is invalid traffic, we can refund it.”

In 2015, the DSP DataXu created a fraud-free guarantee offering refunds for tech fees on fraudulent inventory (as determined by DoubleVerify), as well as any media costs it could recover. Video DSP TubeMogul followed in 2016, using WhiteOps as its third-party vendor. AppNexus and OpenX also said they offer fraud-free guarantees clients can opt in to.

Many marketers have added language to media contracts stating they will not pay for invalid traffic, following ANA recommendations. And agencies often work with clients to create benchmarks around fraud that they and their tech partners must meet – including partners like DBM, who now have a way to fulfill those requests without being on the hook for media costs themselves.

The impact of Google’s fraud initiative could bring more trust – and higher prices – back into the open exchange, and cut off people profiting off invalid traffic.

Essence’s Garza said his agency has seen prices on the open exchange drop as advertisers flee an environment where they no longer feel confident they can buy safely.

Plus, while Google said it catches the vast majority of ad fraud before it pays anyone, companies profiting off ad fraud survive and thrive on 100% of what makes it through. So clawbacks should reduce the financial rewards of invalid traffic.