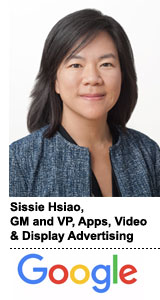 “I’m always thinking about taking a bigger leap and a bigger risk,” she said.

She pioneered one such leap while leading AdMob, where she championed Universal App Campaigns, a product that uses machine learning where Google originally planned for manual controls.

Machine learning controls campaign bidding, targeting and creative selection. And instead of having to manage separate app campaigns for search, display and video, Universal App Campaigns buys across all three channels, swapping out the best creative or targeting that works for each place.

Advertisers who once only bought app install ads within AdMob apps saw their spend shifting to new channels, including Google’s sister products, search and YouTube. Hsiao also helped open up the Play store to app ads for the first time, creating a new place for brands to advertise their apps.

“We were able to obfuscate the differences between inventory and simplify the buy,” Hsiao said. “The advertiser doesn’t have to understand the modalities of all those users in all those environments. The machine learning does it for them.”

AdExchanger spoke to Hsiao talked about how she’s pushing her team to make bigger leaps forward in Google products through the use of automation. She declined to discuss Chrome’s move to drop third-party cookies in this interview but will offer her take Jan. 28 at AdExchanger’s Industry Preview conference.

AdExchanger: What’s been your first order of business in your new role?

What else are you focusing on?

Leaning more into automation. In apps, I was a champion for automation and making sure that automation is being evaluated as a potential solution for customer problems in all feature development and all product approaches. I often ask the question, “Have you evaluated automation as part of the solution, if not the solution?”

Is the idea of campaign automation that you pioneered with Universal App Campaigns expanding beyond apps?

It’s starting to be done in pockets elsewhere. We have Smart Display campaigns that seek conversions on display inventory, and we’re eager to see more adoption there. Some campaigns are hybrid machine learning, where the bidding is smart but the targeting is still natural. And Google Ads uses the same approach in our location campaigns and our shopping campaigns.

Why do you think Prabhakar Raghavan picked you to lead display, video and apps?

Some distinguishing characteristics of me – which Universal App Campaigns exemplifies – is that I built my career building things people didn’t tell me to build. They didn’t tell me what to build or how to build it. I’ve always been an optimistic person for technology being used to solve business problems.

Privacy is absolutely top of mind. I’m thinking about not just responding to regulation, but how we can evolve this industry forward and think about a new approach to display and third-party inventory monetization.

The display ecosystem is not just complex but interdependent and entangled in an interesting way: the buy side, exchanges, sell side, multiple auctions.

When you think N years ahead in that ecosystem, as the approach to identity and privacy are changing, that becomes a business challenge and an engineering challenge to design this ecosystem N years out. Automation is going to be part of that story.

What does it mean to think ‘N years out?’

Our goals are, in parallel, one year out and N years out: What is the initiative that will take two or three years to complete, but will give us a bigger jump forward than what you’re doing day to day?

Running an ads business – because you have those figures you need to hit – often you do end up with teams that look more tactically at things. But I’m always pushing them to think about the foundational investments that you want to make for your product and your customers that can jump ahead.

I’m a very inclusive leader. I want to hear all the voices in the room. A fallacy of leaders can be feeling like you know more or know better because you happen to have more authority officially. But I often think about how people in the room spend their day thinking about a problem more deeply than I do, so I want to include those diverse voices in the room and make sure that everyone has input.