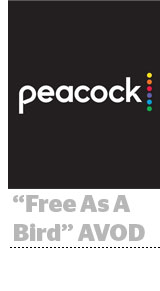 As the streaming wars intensify, NBCUniversal on Thursday sought to draw a clear distinction between the soon-to-be-launched Peacock and its streaming and digital competitors.

Peacock will debut with 10 ad experiences that emphasize interactivity and performance, the company revealed during an investor day in New York City. It will run just five minutes of ads per hour, the lightest ad load in the industry. NBCUniversal will also set strict standards for frequency caps.

“Our audiences won’t be inundated with the same ad over and over and over again, like they are on other platforms,” said Chairman of Advertising and Partnerships Linda Yaccarino.

NBCUniversal’s pitch to advertisers also highlights a scaled platform with content that costs millions of dollars to make – not updates from friends or uploaded videos – and better business terms than the digital giants.

“Transparency is the cornerstone of everything we do,” Yaccarino said. “While other platforms are building higher walls around their gardens, we’ve never had any walls at all.”

Peacock wants to change that dynamic by owning distribution and controlling the ad experience from end-to-end.

The platform will launch in April for cable subscribers who will receive a free premium subscription, such as Comcast X1 subscribers. It will then roll out more broadly in the weeks before the Olympics.

Launch advertisers Unilever, State Farm, Target, Apartments.com, Eli Lilly and others have committed hundreds of millions of advertising dollars to the platform.

NBCUniversal’s ads will allow users to interact or take an action while seeing more branding-focused messages.

For example, Yaccarino previewed a Target ad that could text a link to viewers’ phones to download the Target app. And NBCUniversal will bring its linear TV shoppable ads to Peacock.

Peacock will also offer Pause ads, which Hulu and Xandr recently introduced. Another variation of a pause ad will show contextually related offers when a viewer hits pause.

Other ads will emphasize the advertiser’s role in delivering content.

With Binge Ads, advertisers can sponsor a fourth episode ad-free. Another variation allows advertisers to sponsor a show with a single ad from the brand. Hulu launched its own binge ads in December.

Yaccarino sharply contrasted Peacock’s approach to the data policies of digital tech platforms, which have faced a backlash from their data collection practices and brand safety issues.

“With Peacock, we’ll be open about how we’re using data to improve the consumer and the advertising experience,” Yaccarino said.

Peacock’s data will come from Comcast set-top box data and “data from assets across our company,” she said. NBCUniversal will create direct-to-consumer relationships via Peacock. Advertisers will be able to use their own customer data on the platform.

Peacock will share data with advertisers via an open analytics dashboard. Advertisers will be able to see exactly where their ads ran, including the content they played against, she promised.

And of course, NBCUniversal offers not just data, but data at scale, Yaccarino said.

“Ad-supported streaming is about more than giving consumers what they want,” she said. “It’s also about giving advertisers what they desperately need … scale.”