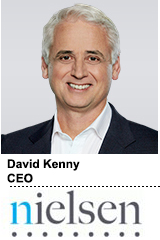 When Nielsen CEO David Kenny stepped into the top role at the end of 2018, the company was embattled on multiple fronts.

Viewers were shifting to streaming TV, which Nielsen struggled to measure. Nielsen’s media customers, frustrated with the company’s slow pace of innovation, started moving away from its measurement services. NBCUniversal, for example, spearheaded the cross-platform currency metric CFlight.

Nielsen’s finances were even worse. The publicly traded company’s stock had been in decline since 2016, and it missed earnings estimates. Then activist investor Elliott Management bought a significant stake in 2018 and began pushing for changes, including a sale.

Kenny’s background uniquely qualified him for the challenge.

He’d also sold The Weather Company to IBM for $2 billion in 2015, and Digitas to Publicis for $1.3 billion in 2007. He knew how to get deals done. He also carries a reputation as a strong operator and innovator.

At Elliott Management’s urging, Kenny spent a good portion of his first year trying to find Nielsen a buyer. None emerged. Instead, Nielsen will split into two public companies, Nielsen Watch and Nielsen Connect.

With the deal nearly done – his team is still searching for a new CEO for the Nielsen Connect business – he’s planning to devote more of his energy to make Nielsen’s core media measurement and attribution business run faster in the coming year. He talked to AdExchanger at CES in Las Vegas, Nevada.

AdExchanger: How did you decide to split Nielsen in two in November?

Because we owned the buy business, we were very focused on attribution for packaged goods, which measures everything people buy in supermarkets and drugstores. But people buy other things.

We don’t need to own one vertical, we need to have partnerships with the data sets on all the verticals.

Let the other [Nielsen Connect] business serve retailers and packaged goods companies. And let the media business really become a measurement of audience, attention and attribution for all categories, and in a more open way with other information sources.

It will help us run faster and it will certainly free up capital to invest more in keeping up with all the things media needs.

That’s a joint venture. You’ll see us do more deals like that – they don’t have to be joint ventures, they could be commercial arrangements where we are partnering with other companies for data.

What other kinds of partnerships?

I want to make it easier for Nielsen data to be used in other tools. As an example, Amobee did a deal to license Nielsen’s ACR data to get to four screens.

I hope you’ll see many more examples of marketing and ad technology with Nielsen inside. I think that’s a better way to serve the industry than to say everything needs to be made by Nielsen.

Would splitting the company have been your first priority if Elliott Management hadn’t pushed for it?

If you merge a lot of things together, you can lose focus. In 2019, Nielsen began to establish a pattern of hitting its numbers every quarter. That wasn’t its history. I was clear we needed to run them separately. And the other question is, “Do they need to be in the same stock?” I think I would have done it anyway.

Elliott’s been a really good partner. I’ve been very happy with them.

The reputation of Elliott Management is the opposite of “good partner.”

I do know that. If you disagree, they’re aggressive. But how they work with AT&T and IPG now is okay. They are good partners if you show respect and listen to their point of view, but that’s true of all of our investors.

With this split, did Elliott Management get everything they wanted – or do they still have other things they want to do?

Well, they didn’t get everything they wanted. They thought the company should go private. But we didn’t have a deal with the right value to our shareholders. And beyond that, I cut back the dividend, because I wanted to continue to invest in the product.

Are you interested in being acquisitive, maybe of a new measurement company cropping up?

For sure. Part of spinning off Connect was to have a balance sheet to acquire when we need to. But I don’t want to acquire new revenue streams and diversify the portfolio again. If someone invented something and we can make it go faster as a part of Nielsen – and it would take us two years to build it and I can buy it today – of course I’m going to do that.

What about buying Comscore?

I’m not going to comment on any specific company.

I bet you could get a good price for it.

You get what you pay for.

How will splitting Nielsen in two make it run faster?

What I’m driving is a unified product strategy, a unified data strategy and a unified technical strategy. Nielsen has a lot of arms with separate stacks. We need one approach to the panel, one approach to the big data. The work in 2019 and early part of 2020 has been infrastructure, like getting everything to work on the public cloud, so it’s simpler.

What’s frustrating is that it only goes faster when product management can put it together faster. But I couldn’t tell product management to go faster if I didn’t give them tools that were easier to work with. So we’re starting at the foundation.

Nexstar came back to Nielsen after 16 years of not using Nielsen. And that was because the product worked to their needs. That got done because we had a focused team, and the product, tech, data science and finance teams were all aligned. In the old Nielsen, getting a decision made was hard. We were able to make much faster decisions, get it tested by MRC and launch. I’m still very focused on picking up our velocity. We have to run faster than our clients.

Nielsen’s stock has continued to slide since you’ve joined. Will it go up again as you continue to increase velocity, or will it take more time?

Every logic is that it should go up. The company’s growing and has healthy margins, and comparable companies have higher multiples. Nielsen had a few years where it overpromised and underdelivered. Realistically, it could take another four to six quarters. But I’m not watching the stock price every day. Our velocity has to deliver products that grow our clients’ businesses and therefore increase our revenues.

This article includes an updated quote from David Kenny.