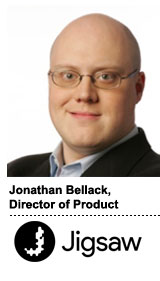 After 14 years at Google and DoubleClick, ads vet Jonathan Bellack has joined Alphabet-owned Jigsaw as its first-ever director of product.

Google created Jigsaw as a technology incubator with the mission of using technology to make the internet safer.

One project, “The Redirect Method,” crossed into ads territory: It identified potential terrorist recruits and attempted to deter them by showing them ads and videos of the reality of life under ISIS.

Jigsaw’s focus aligns with a rise in activism in Bellack’s personal life. He cofounded the nonprofit New Jersey 11th For Change two years ago to spur more responsive, transparent and accountable congressional representation.

Then “he got lucky” when the opportunity emerged to work full-time on issues he cared about, Bellack said.

“It was time to bring in even more senior expertise,” said Dan Keyserling, Jigsaw’s head of communications, public affairs and operations. “Bringing in a product director acknowledges a growth in the team’s maturity and our ambition – doing things at a higher scale and achieving a greater impact on the world.”

Bellack talked to AdExchanger about leaving the programmatic world and his future at Jigsaw.

AdExchanger: Why are you joining Jigsaw?

Even if it’s not ads, I’ll have the chance to work with content companies. A lot of people who were partners in the Google Ad Manager world, I’ll still be working with, just in a new way.

At Google, you always talked about wanting to help publishers do their jobs. Is that still the case at Jigsaw?

Jigsaw’s mission is about using tech to make this world safe. There is a lot of common interest with the news industry. The people who gather and report the news are those that we want to be safer. You look at Jamal Khashoggi as the ultimate example of a journalist being killed for what they were doing.

If we can do our part to make sure someone doesn’t get hacked or interrupted, you can go on to things like repressive censorship. If the news can’t go through, is it really the news?

Jigsaw worked on combatting DNS [domain name system] manipulation, which is a common censorship mechanism. We released a product called Intra that helps defend people who get redirected to a hostile site or one not telling the truth.

What do you consider your greatest accomplishment from your time on the ads side?

What I’m proud of is that we as a team were honest and ethical.

I took over DFP at the beginning of 2005. I had an early customer meeting in San Francisco. I’m young and still learning. The customer literally put their feet on the table in front of me and said, “DoubleClick has lied to me and let me down so many times. I don’t know why I should believe a single thing you say to me today.”

I could have walked out the door and had a burrito. But I stayed and worked on it.

The head of ad ops at a major New York broadcaster asked me, “Why does DFP suck so bad?” It was a good product, but there are a lot of companies in the ad tech space who make promises to make a number, or exaggerate their capabilities or cut corners.

Even if you don’t love what we’re doing, we’re honest about what we’re working on and why. We don’t announce exchange bidding and then not do it. There is not a secret plot. We are what we say we are.

What were some standout moments for you?

Then we had a three- or four-year process of unifying DFP and the ad exchange to create Google Ad Manager. These are the kind of things that often go wrong and don’t succeed. I’ve lost track of the number of times people tried to call DFP a dinosaur. People use that as an insult. Birds are dinosaurs. Eagles are dinosaurs.

More recently, I think people in the industry never thought we would do something like exchange bidding. They didn’t think we would hear the feedback from the industry, see how things were changing and open up.

Programmatic has been a disruptive force. What’s surprised you about the evolution of programmatic?

There is still huge potential, and there are risks. Server-to-server connections are a better way to do business and more efficient and doesn’t put as much load on client devices. Programmatic guaranteed is another example of programmatic’s potential. It had a phenomenal 2018. The transformative potential of programmatic is still happening and still growing.

The regrettable thing that the industry is starting to come to terms with is that the whole industry is at its best when it’s adding value: Publishers helping advertisers reach consumers.

The classic example is CNET inventing 300x250s and putting animations in the ad back when it was called Shockwave. It added value, and it was a healthier way to do it than pop-up ads, which were harmful to users and led to browsers creating pop-up blockers.

The risk with programmatic is remembering to focus on true value versus financial engineering, like manipulating auctions to grind out small increments of yield. That isn’t creating value, so there’s only so long that can be sustained. Companies thrive on creating sustainable, real value, not being cleverer than the other people.

Could programmatic have been architected differently to prevent that? Or is that just the downside of openness?

I would say none of the above. When technologies are new, people don’t always know what they can be used for. That’s part of the fun and glory of applications.

When programmatic started, it was for ad networks to compete for remnant inventory. The idea of moving guarantees and reservations into server-to-server connections wasn’t the forefront. People have not been afraid of change, and my team had the idea of Ads.txt.

Recognizing there was a flaw in the system causing epic quantities of fraud and coming up with a way to combat it to make the industry a more honest place – that’s something I’m proud of.