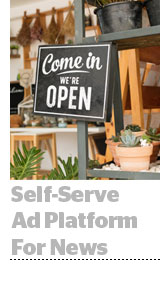 The Washington Post became the latest publisher to develop a self-serve platform to compete with Facebook when it released Zeus Prime on Tuesday.

The Washington Post’s RED team integrated Zeus with Polar to enable the native-style add units and the buying portal.

The Washington Post will pilot the self-serve platform with local, DC-area advertisers. Advertisers running local events, for example, often have small budgets and tight turnaround times, making them a strong fit to use Zeus Prime.

These advertisers will upload the same creative used for their social campaigns. The ads appear on The Washington Post in a native, Facebook-style ad format created by its tech partner Polar.

The Washington Post hopes Zeus Prime will entice advertisers who saw no other option than to spend with Facebook.

“There are direct response advertisers in the local space who do leverage Facebook as their primary solution,” said Washington Post CRO Joy Robins. “This introduces something new for them: real-time, targeted advertising but in a way that’s brand-safe and premium content in well-lit publishers.”

Zeus Prime is setting its offering apart in a few ways. Since a draw of Facebook is its data, the Post is making unique data available: Advertisers can target their campaigns using 1,400 contextual-created topics that might fit for the brand.

Plus, the Post doesn’t want to limit the platform to one publisher, but create an ad network. Any publisher on Zeus can connect to the Zeus Prime buying platform.

Currently, Zeus Prime isn’t fully automated – deals must still be trafficked via The Washington Post’s traditional ad ops protocol. Nor can marketers upload their own data and do a match, a key feature of Facebook.

“When an advertiser wants something up in the next 24 hours, it’s really hard to do [that campaign] at a publisher’s site,” said Jarrod Dicker, VP of commercial tech and development at the Post.

Pricing will aim to be premium – but at a price that performs for brands. The Post wants to use automation to make it easier to activate, without the typical programmatic downside of lower prices for publishers, Dicker said.

After testing with local advertisers just on The Washington Post, Zeus Prime will expand to other publishers that use Zeus and larger clients, including brands and agencies.

“This solves a challenge that the ad community and the publisher community face,” Robins said. “Brands have the opportunity to support quality journalism, in a way that drives results for them as well.”