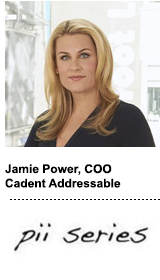 Jamie Power has been in addressable TV since the early days.

After working her way up through the agency world as a media planner and a brief stint in sales, Power joined Modi Media, GroupM’s advanced TV division, in 2013. She’s now chief operating officer at Cadent Addressable, an advanced TV platform head up by former Modi chief executive Mike Bologna.

“I’m passionate about advancing the TV marketplace,” she said. “There’s so much opportunity for clients.”

While brands always knew TV worked, they were in the dark about how much it contributed to the bottom line. “Being able to show a brand what worked and what didn’t work is pretty cool,” Power said.

Addressable TV is still fragmented and difficult to plan and buy, but Power isn’t one to back down from a challenge. Early in her career as a planner and strategist at GroupM’s MEC, Power would add new clients to her workload once she got comfortable with an account so she could continue to learn more.

Soon, she was a jack-of-all trades, accompanying senior executives on major pitches. By 28 years old, Power had made partner at GroupM.

“Any time I got comfortable on an account, I knew it was time to ask for something else,” she said. “If you’re not uncomfortable, you’re not learning.”

AdExchanger: What’s it like having such a cool last name?

JAMIE POWER: Power is my married name. When we launched Modi, Mike [Bologna, President of Cadent Addressable] handed me my business cards and said, “Your new last name is too good not to use.” It’s easy to spell. You can make jokes on stage about it.

Some people marry for money. I married for the name.

It’s the way the future is going.

I was drawn to the scientific nature. I’ve always worked on TV heavy accounts. When I worked on Pizza Hut, they would buy cheese and sauce based GRPs. I thought that was kind of cool, but addressable took it to a new level.

You spent most of your early career at agencies. What did you like about that?

The first agency I worked at was smaller. When I went to GroupM, there were so many resources. I learned about every single tool [we had]. I was junior, but I was the best at using them. It got me exposure to senior executives. I was 22 or 23 years old, but I got to meet the CEO and the head of analytics. Had I just worked on my account and done my job, I never would’ve gotten the exposure.

What was the state of addressable TV when you launched Modi?

Around 22 million households were addressable. The tech had been around for a couple of years and nobody was really doing it. I was going into the agencies and figuring out why. I was the subject matter expert.

Why weren’t the agencies doing it?

They needed more education. We had to work with them to build a plan because teams didn’t have the bandwidth or resources to do it themselves.

You have people who were buying on GRPs their entire career. You’re changing currency and giving them attribution they’ve never seen. No one is going to talk to their client about something that they’re not comfortable with.

What’s changed since then?

They got more comfortable. When I pitch addressable even now, I try to speak in English. We’re using data to find high value audiences, sending messages just to those households and adding accountability to the back end. If you’re too technical, people don’t understand what you’re saying. If we didn’t try to sound smart in rooms and say all these big words, the comfort level would be a lot higher.

Are you satisfied with where addressable TV is today?

When I came from Modi, addressable was automated, but not really. It was like ten telephone books worth of excel spreadsheets.

I remember early on at Modi, [the] media came in different formats from different providers. I was up one night until 4:30 am putting media delivery reports together. Now, because we have connections with MVPDs, what used to take hours takes maybe four minutes.

What do you wish was different about the industry?

I’m always surprised how little people know about addressable. I wish everything would catch up because it’s amazing what you can do. That’s one of the things I like about working here; we’re smaller and we can move fast.

I also wish the TV marketplace would work together. Nobody can agree. All these consortiums pop up and go away and come back. This isn’t competition. This is the marketplace coming together to create a better product as TV changes.

The biggest thing that doesn’t make sense is creating walled gardens within television. The data and technology exist to give a marketer everything they want. But if we create artificial walled gardens, they’re not going to be able to do it.

What do you do for fun?

I live on the Upper East Side. I have a son, Liam, he’s almost six. I had him right before we launched Modi, so it was a crazy time.

I joke that addressable actually is important, because I watch TV like a 13-year old girl: Bravo, Hallmark, Freeform, The CW. If you want to reach someone in market for a luxury automobile, you wouldn’t be running on the CW.

This interview has been edited for clarity.