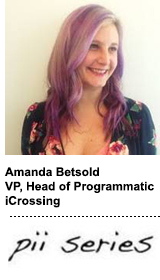 Outside of the office, Amanda Betsold may be found running in an Ironman competition, scuba diving with leopard seals in Antarctica or attempting to climb the seven summits.

“I never choose the safe bet,” said Betsold, a programmatic lead at iCrossing. “If I’m going to put effort into something, I want to make it worth my time.”

Although Betsold channels much of her energy into passion projects, she still has some fire left to take on big industry initiatives, such as viewability, brand safety and leading iCrossing’s clients through the ever-changing programmatic landscape.

“I’ve always found other paths to create growth opportunity for myself and my team,” she said. ”Projects allow me to clear my mind and be more focused and productive.”

Betsold’s latest passion project is the Do Better Initiative, which will raise money for seven charities by climbing the tallest peak on every continent. She’ll hit Mt. Kilimanjaro in Tanzania in June, Mt. Elbrus in Russia in July and Mt. Kosciuszko in Australia in October.

“The goal is to be able to at least attempt Everest,” she said.

AdExchanger: How did you get interested in media and marketing?

AMANDA BETSOLD: During undergrad at the University of Virginia, the most inspiring professor I had was our advertising professor. I interned at McCann Erickson my junior year. I loved it so much, I went back the next year. I knew I wanted to come to New York and pursue that.

It was back when digital was this new thing that nobody knew what to do with. The IAB hadn’t standardized ad sizes. My first job was at FCB. [They said], “We have two roles open. One is for TV, and you’re going to work on this boring health care client. The other is for a telecommunications client doing this digital thing. We’re not really sure what to make of it yet.”

I thought, “That sounds exciting. That means there’s opportunity.”

Why’d you take the risk to jump into something new?

I’m from Virginia. My family never traveled much. And that was always my personality – to wander off and find my own path. In college my parents wouldn’t pay for me to study abroad so I pooled together all of my savings. I always had side hustles to make my own thing happen.

How does that translate to your success at work?

I’ve never stuck to the job description. At UM, my primary function was to lead a team across digital, search and social. But that was when viewability hit the scene. So I raised my hand and said, “I want to be the UM expert at viewability.”

I [took] this role [at iCrossing] when programmatic was coming about. IPG was forming Cadreon, and they needed someone to champion programmatic in the agencies and figure out how it was going to apply to our clients. I raised my hand for that too.

You were at UM for five years. How did you end up at iCrossing?

Mike Racic, who I worked with at UM, ended up being president of media here. He reached out and said, “We’re building a programmatic team from scratch. And we’re going to be transparent.” I said, “That’s the one thing that I don’t get excited about here.”

That summer, clients were starting to call [agencies] out for not being transparent across the industry. It bothered me, and frankly, a lot of other people. When he offered that transparent model, I said, “I see that as the only way to be successful five years from now. I’m in.”

What was it like feeling uncomfortable with the business model of programmatic at the time while also selling it to your clients?

It was industry standard at the time, so it wasn’t a conflict yet. It was more thought-provoking.

I could see it was going to have to change, but we were still too preliminary to get into the weeds. And I knew that programmatic was the right answer for clients. We needed to move out of this black box ad network model. We could see what sites we were running on or how many impressions are being delivered in certain places. There were enough benefits that the pricing conversation was still a few years away.

You owned a bar at one point.

While I was working full-time at UM. I would come to the office at 7 am and work on it until 9 am, and then after work and on the weekends. I worked 100 to 120 hours a week. I was sleeping barely at all.

Everyone wants to own their own business at some point. It was this great balance for me. Building something new is exciting. Figuring out branding, staffing, operations, even how to curate a beer list. It made me more excited about work during the day.

What advice do you have for young professionals who are adventurous and ambitious like yourself?

Form your own opinions and speak up. Take everything with a grain of salt, but absorb everything, process it and figure out what your point of view is.