If you hear heavy breathing when someone unmutes themselves on a conference call – it could be because they’re also riding on their Peloton.

“Don’t try to beat any distance records during a meeting,” warned Emily Adams, an ad tech PR freelancer and Peloton devotee who will sometimes ride during calls.

“I learned this lesson after being called on unexpectedly during a client meeting and was so winded, I had to mute myself between every sentence to catch my breath.”

Adams is one of the many workout devotees in the ad industry who are finding creative ways to squeeze in workouts as the months of quarantine drag on.

During one long agency all-hands meeting, Adams rode 10 miles. For small meetings, though, Adams always gives the other attendees a heads up when she’s doing a workout. And she finds people are more understanding of athletic multitasking now than pre-pandemic. “Be honest!” she advised. “Trying to hide it makes you more out of breath.”

Internal update calls are a popular time for Fyber Chief Revenue Officer David Simon to squeeze in a workout – but always with the video off.

“Nobody needs to see a gross sweaty version of me,” Simon joked. During cross-training exercises, he looks more presentable, so he feels comfortable keeping the camera on. “I’ve also been known to use resistance bands during video calls,” he said.

But not everyone mixes work with working out. Early morning or afternoon Zwift rides are the norm for Rebel AI CEO and founder Manny Puentes, a devotee of the hardcore cycling setup where a real bike is hooked up to a smart trainer.

But because he’s working from home, Puentes will often go straight into conference calls after completing a ride, skipping his shower and staying in his sweaty clothes while he works. “That’s probably the biggest fail,” he confessed.

Early in the pandemic, TripleLift CEO Eric Berry attempted a Peloton video conference with a friend in the industry – but was not impressed with the experience.

Berry and the other rider spent most of their time catching their breath rather than having a chance to properly chat. He’s had other clients request Peloton meetings since then and remains unimpressed.

Along with a live video closeup of your client’s sweaty and blurry chin on video conference, the competition feature – where you can see each other’s score – makes for uncomfortable mismatches in ability which can make both sides feel bad about themselves, Berry said.

“I could not have designed something more awkward,” he said.

But when the main purpose is the workout itself, riding buddies can enjoy virtual sessions together. Early in the 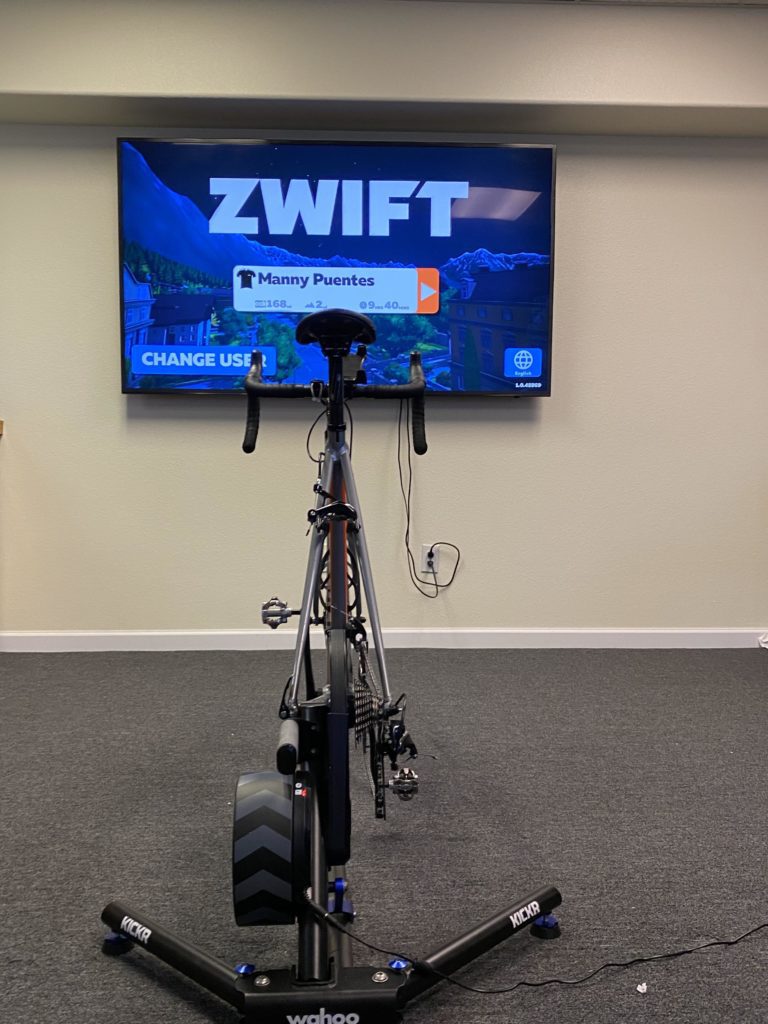 “Zwift fills the void of not being able to exercise outdoors and adhering to social distancing,” Puentes said. “Typical trainers can be pretty boring; you’re not riding with anyone else, or talking, so this is more interactive.”

People in the ad industry have also found each other and joined groups on social workout apps, such as Peloton and Strava. On top of working out during meetings, Fyber’s Simon participates in an ad industry Peloton group. He rides with others in the industry and can keep up to date on their stats and favorite types of rides and instructors whether or not they’re all riding together.

To help foster a community around working out, MarketMakers LCC, a marketing advisory firm known for organizing 5k runs during industry conferences, including Cannes, launched a virtual networking and exercising program during the pandemic that now has more than 100 people. For “National Superhero Day” in April, the group logged five-mile runs and 25-mile rides to support heroes on the frontlines.

“The community that has organically formed around the challenges has been rewarding to watch,” said MarketMakers CEO Celeny Da Silva, who herself has been logging miles near the Great Smoky Mountains in Tennessee, where she’s sheltering in place.

Coworkers that sweat together, stick together

Group workouts are also starting to catch on as a form of remote team-building exercise.

Companies including SpotX, Fyber, Kochava and OH Partners have organized group yoga classes, circuit training and meditation sessions in an effort to inspire and motivate their employees during the pandemic. Sometimes they’re taught by professional, outside instructors. Other times, staff step up to the plate.

Social media account exec Huy Nguyen often shares his workouts on Instagram, so it was natural for him to lead a 30-person lunchtime workout of jumping jacks, pushups, planks and dips that brought together different departments.

“My favorite part of the workout was when my boss and VP of social/PR, Jason Miller, joined our Zoom to drink a beer in front of everyone … but failed to get his camera to work for the first 15 minutes of the session,” Nguyen recalled.

At Colorado-based SpotX, a group does live F45 HIIT (high-intensity interval training) classes together, while another group of 27 people has embarked on a Sabertooth Fitness nutrition and workout challenge – keeping the state’s reputation for being the fittest in America intact.

But alcohol and working out can mix, as it turns out. Beer yoga draws in employees at Kochava, who have been gathering weekly throughout the pandemic. The company’s director of PR, Leslie Amadio, is also a certified yoga teacher, so she leads these sessions for the group.

The question is, what happens to all of these new exercise regimes as the country starts to open back up?

A dozen weeks into quarantine, some people admit to slacking off on their routines, while others hope to emerge from shelter-in-place more healthy and fit than ever.

As summer weather beckons and restrictions loosen in some areas, the Zoom workout may take a brief pause. Even Peloton addict Adams is mixing up her working-while-virtually-pedaling routine.

“Now that the weather is warm,” she said, “there’s always the tried-and-true method of walking – or running – around the block for an afternoon break and mental boost.”