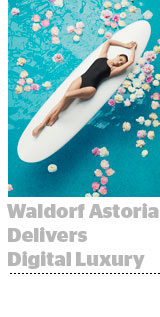 Waldorf Astoria is using social media to connect with the young, affluent millennial women it sees as its next guests.

The goal is make sure that the ritzy Hilton-owned brand, whose roots go back to the late 1800s, has a marketing strategy that hits “the sweet spot with the newer entrants to the luxury demographic,” said Hilton CMO Kellyn Kenny, who joined the company in January from Uber.

The hotel’s branding campaign, “Live Unforgettable,” features short videos showing the Waldorf Astoria staff as they fulfill unusual, playful requests: A woman asks for her pet dog to join her in the spa, a couple orders every sundae on the room service menu and a family plays table tennis in their room.

“While we have this authentic luxury heritage, we don’t take ourselves too seriously,” Kenny said.

That’s why social media felt like the right place to demonstrate Waldorf Astoria’s focus on service – and to emphasize that the brand is modern and fun, not stuffy.

The global campaign launched in the US in June and will roll out to Europe and Asia later this year, with emphasis on the social networks that matter most in each market.

In addition to promoted posts and paid distribution throughout feeds, the campaign also uses influencers posting using the hashtag #LiveUnforgettable.

But, in a market where influencers clamor for free stays and are known for fake followers, Hilton is paring back the number of influencers it works with. Just three to four influencers will be dedicated to the campaign and amplify the “Live Unforgettable” message.

“We are working with influencer partners that are truly endorsing their brand, because it’s a lifestyle brand for them,” Kenny said. “Not just supporting us this week and someone else the next week. “

Hilton does creative testing before campaigns go live, Kenny said, which allows for last-minute tweaks and helps make sure a campaign is resonating with consumers.

Preliminary testing showed that the videos raised awareness and consideration among affluent consumers – and did well in the all-important category of message retention, Kenny said. Hilton will also track how these metrics are trending after the campaign.

Hilton created five segments who will see the ads, focusing on reaching consumers who show interest in luxury travel, luxury auto and luxury retailers. Those behaviors signal a consumer is affluent or “mass affluent,” a broader category of consumers who are dipping their toe into luxury purchases, said Jamie Harbeck, senior director of brand marketing for Hilton.

Hilton can deliver the marketing personalization its customers expect during their stay at the Waldorf Astoria.

The videos will appear with different lengths and in different formats, such as carousels and GIFs, to better match the platforms where people will see the message, Harbeck said.

“The great thing about digital and social is that you can be nimble and test and learn throughout,” she noted.