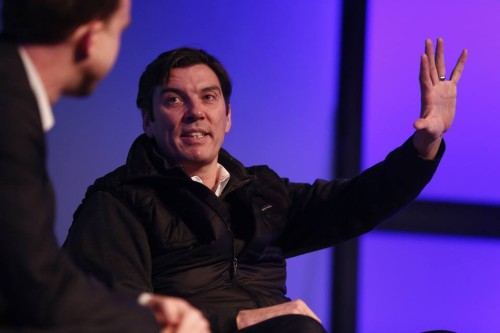 The writing was on the wall, but now it’s written in ink: Oath honcho Tim Armstrong will leave Verizon at the end of the year.

Current Oath president and COO K. Guru Gowrappan was named as the new CEO, Verizon said in a release. Armstrong will aid in the transition.

When Armstrong joined the telco in 2015, following its $4.4 billion acquisition of AOL, industry insiders wondered if Verizon could become a powerhouse to take on Facebook and Google.

While that has not happened, Armstrong said in an exit email obtained by AdExchanger that he still has high hopes for Oath.

“While there has been and will be speculation about these changes, there are a few important signals that should not get lost in the noise,” Armstrong wrote.

“The first is that the world has gone digital and few companies have both mobile and digital assets at our scale. Add to that the backing of the best mobile company in the world – Verizon – and Oath has all of the right pieces to succeed.

“The second point is that things take time. It took more than two and a half years to turn AOL around; Oath is just over a year old and the first year was spent integrating the post-Yahoo auction assets and working through the data breach related issues. It is going to take time for Oath to reach its full potential.”

The full email is reprinted below.


The hope that Oath could compete with the Facebook-Google duopoly was not unfounded. Armstrong – along with Bob Lord, now at IBM – had improbably revived AOL by building both an ad tech stack and a digital media empire.

The combination of AOL’s ad platform along with Verizon’s reach was an enticing proposition: “It allows us to have a big seat at the big table with mobile and OTT [over-the-top] video and everyone here is really excited about it and excited to work with Verizon,” Armstrong said at the time.

But there was a catch. Realizing that potential required grabbing Verizon customer data – and Verizon proved squeamish. It had, after all, been bitten by the Federal Communications Commission before due to illicit tracking, via a so-called “supercookie.”

About a year after the acquisition, Verizon added Yahoo to the mix, merging it with AOL to form Oath. At the same time, AOL and Verizon started pushing out ad offerings that used shared data assets, but the FCC, which had successfully gone after Verizon before, was further sharpening its regulatory claws.

And after officially acquiring Yahoo in 2017, it still was not clear to what extent Oath could access Verizon data.

Amid this state of affairs, Armstrong’s original backers – former Verizon CEO Lowell McAdam and Global Media President Marni Walden – left the company. With new Verizon CEO Hans Vestberg focused on building out a 5G network, there seems to be less emphasis on addressable advertising at Verizon.

The following is Armstrong’s exit email:

After almost 10 years as CEO – a journey of teamwork that has included turning around AOL while outperforming the market, strategically combining AOL with Verizon, and creating one of the largest digital assets in the world with the acquisition of Yahoo to create Oath – I am handing off the CEO torch for the next stage of the race to Guru.

After joining us from Alibaba at the start of Q2, Guru has been leading global consumer and revenue operations and has worked tirelessly to execute Oath’s strategic mission and operating plan.  With our closer alignment with Verizon, Oath and Guru will be able to unlock a series of continued growth opportunities similar to the investments that Verizon has put into the Oath Super Channels and Apps.

While there has been and will be speculation about these changes, there are a few important signals that should not get lost in the noise.  The first is that the world has gone digital and few companies have both mobile and digital assets at our scale. Add to that the backing of the best mobile company in the world – Verizon – and Oath has all of the right pieces to succeed.  The second point is that things take time. It took more than two and a half years to turn AOL around; Oath is just over a year old and the first year was spent integrating the post-Yahoo auction assets and working through the data breach related issues.  It is going to take time for Oath to reach its full potential.

Lastly, and most importantly, our brands and our talent matter in real ways and make a positive impact on hundreds of millions of lives around the world.  Yahoo Finance is one of the largest financial news and data platforms in the world, TechCrunch and Crunchbase are two of the largest providers of tech information in the world, Yahoo Fantasy Sports provides millions of sports fans a deep community for their most passionate interests, Yahoo and AOL Mail & Search products serve our most valuable audiences, and our newly launched and unified Oath Ad Platforms provides the world’s most important brands and publishers a growth engine for their businesses.

What has been most memorable and impressive over the last 10 years is the work done by our people and our leaders.  There are no words to describe how I feel about the people I have worked with and the leadership they have shown. Many times the only path forward was to blaze a new path.  One of the more meaningful trails we blazed has been around women – with the founding of two companies, MAKERS and #BUILTBYGIRLS. Both companies have made significant contributions in telling groundbreaking women’s stories and supporting female founders.

Over the years, we have not only built brands people love, but also bonds with each other and communities around the world through Oath for Good and your volunteering efforts.  Across the globe we have touched millions of lives and have made a lasting impact on hundreds of non-profit organizations.

Thank you to my executive team at Oath, a super special group of people, as well as my amazing support staff Enrique, Katherine and Corinne. And thank you to all of the support teams across the company – the food service teams, building security teams, and janitorial teams – your work allows everyone else to do theirs and it is greatly appreciated.

From Taipei to Tel Aviv, Dublin to Chicago, Tokyo to Bangalore, São Paulo to Los Angeles, and all of the places in between – and of course NYC, Dulles, and Sunnyvale – the torch is passed and the next leg of the journey begins.  As a strategic advisor to Verizon, I will work closely with Guru to continue the strategic moves we have been making and fully leverage the power of Verizon and Oath for our global consumer base and customer base.